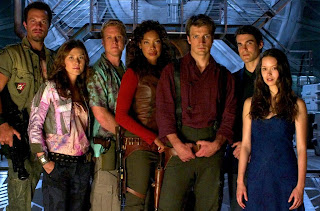 Based on the short-lived cult TV series Firefly, Serenity is the story of renegade crew that is carrying two fugitives where they make a discovery about a man that is trying to find them. Notably as one of the fugitives is carrying a secret about that would impact an on-going war between a totalitarian galactic government and zombie-like creatures called Reavers. Written and directed by Firefly creator Joss Whedon, the film is a continuation of the series by picking things up from a series of comic stories where Mal Reynolds and the crew of the vessel ship called Serenity as they evade from the control of the Alliance government. With a cast that includes the show's main cast like Nathan Fillion, Gina Torres, Alan Tudyk, Jewel Staite, Morena Baccarin, Sean Maher, Summer Glau, Adam Baldwin, and Ron Glass along with David Krumholtz and Chiwetel Ejiofor. Serenity is an imaginative and exciting sci-fi action film from Joss Whedon.

After watching a video of a break-out for a troubled prisoner named River Tam (Summer Glau) who escaped the lab with help from her older brother Simon (Sean Maher), the Alliance leaders hires a top assassin named the Operative (Chiwetel Ejiofor) to find the Tams and deal with them as they believe that River is carrying a dark secret concerning their war with the Reavers. At the ship of Serenity, Captain Mal Reynolds (Nathan Fillion) is organizing another mission with his longtime war buddy Zoe (Gina Torres) and their gruff weapons-man Jayne (Adam Baldwin) as Mal decides to bring River for the job. Though Simon isn't happy about the idea, he reluctantly accepts as the psychic river proves to be useful for the heist as she senses the arrival of Reavers where the gang barely escape with their take. Despite the success of the heist, Simon decides to leave Serenity over what happened as he's taking River with him. Landing at another planet where the ship's mechanic Kaylee (Jewel Staite) is upset about Simon leaving, the crew including its pilot/Zoe's husband Wash (Alan Tudyk) go to a meeting at a bar where River stumbles into the bar. There, she sees a video where she says the word "Miranda" as all hell breaks loose forcing Simon to say something as he reluctantly re-joins the Serenity crew.

After revealing what happened to River, Mal is angry at Simon for the danger that River could've brought as the crew turns to a computer geek named Mr. Universe (David Krumholtz) to decode the video message as Mal decides to protect River from the Alliance. Seeking refuge at the planet of Haden where they reunite with one of the ship's former passengers in clergyman Shepard Book (Ron Glass), Book believes that River might be carrying something that is secretive and that Mal will need to do whatever it takes to protect her. After getting a message from another former passenger in the escort Inara (Morena Baccarin), Mal decides to check if there's a trap in Inara's home where he meets the Operative who wants River Tam. Thanks to Inara's help, she and Mal escape the Operative as they return to Serenity where Jayne feels paranoid about River. After River breaks out of her handcuffs, she shows Mal the place they're looking for as they also deal with the news about the Operative's attack on Haden forcing Mal and crew to go into the treacherous world of Reaver territory where Miranda is. Arriving at the planet, the crew make a drastic discovery about the Reavers through a video log that reveals the Alliance's involvement. Needing to expose the information publicly, the crew decides to go to Mr. Universe's home planet while being at the center of a massive battle between the Alliance and Reavers.

Part of the genius of Joss Whedon is that he is someone who is able to create interesting stories in a certain genre, take another genre and try to create something of its own. For Serenity, he succeeds not only in pleasing fans of the TV show Firefly but also bring in a new audience where he manages to introduce its characters while allowing a lot of back story for them. Though it's not entirely perfect, Whedon does bring in a unique vision to his sci-fi Western story where although it mostly takes place in a science-fiction world. There's elements of the West whether it's the pistol that Mal is carrying to some of its dialogue, setting, and background music. Whedon as a writer creates wonderful tension, interplay with characters, back stories including romantic subplots involving Mal/Inara and Simon/Kaylee that feel natural in their own reluctance. Whedon the director is very hands on with his characters and situations while he even does things that audiences will hate like killing off some beloved characters. Still, he ends up creating a hell of adventure audiences can enjoy.

On the technical front, cinematographer Jack N. Green does some wonderful coloring for the film's grimy yet futuristic atmosphere with some tinted coloring in some of the film's exterior sequences while more intimate shades in the interior settings. Production designer Barry Chusid also does excellent work in creating different looks whether it's the open-spaces of Haden, the exotic Indian look of Inara, or the futuristic cities with the help of visual effects supervisor Loni Peristere who does wonderful work in creating the future and battle sequences. Costume designer Ruth E. Carter also does some great work on the film's costumes with giving each character a distinctive look whether it's Inara's exotic clothing to the more militaristic look of the Operative. Editor Lisa Lassek does some great work in the editing by keeping the film's rhythm while doing some great cutting in not giving the film a quick-cut feel. Sound editor Geoffrey G. Rubay also does some great work in the sound to convey the feel of battle and the fragility of the Serenity ship. Composer David Newman does some great, flourishing acoustic work while some of the music by Whedon and Andrew Dorfman owes more to the West with its dorbo-acoustic guitar arrangements.

The film's cast includes such memorable small performances from such minor characters of Firefly like the twins of Mingo & Fanty played by Yan and Rafael Feldman along with Nectar Rose as Mr. Universe's robot wife, and Sarah Paulson as the woman on the video log. Of the two cast members who weren't in the TV show, David Krumholtz is excellent as the funny techno-geek Mr. Universe while Chiwetel Ejiofor gives one of his great performances as the Operative. Ejiofor brings a lot of complexity to his role as he plays the character with a lot of subtlety and intelligence that he doesn't fall into the trap of a one-dimensional villain as he says that he's a monster yet doesn't act like one. From all the cast members of Firefly, every character is back as they give something to everyone of the fans. Ron Glass is excellent as the religious mentor Shepard Book who likes to annoy Mal with some wise sermons while being the kind of person that the crew can turn to, even when his fate goes for bad where at least, he delivers a very funny line.

Sean Maher is also good as the protective Simon Tam who is desperate for the safety of his sister while struggling with his role as a brother while trying to be part of the Serenity crew in his feelings for Kaylee. Jewel Staite is also good as the mechanic Kaylee who is the most feminine character, aside from Inara, of the team who also has feelings for Simon while trying to understand the behaviors of Mal as she is the youngest member of the crew. Morena Baccarin is great as the exotic Inara who has strained feelings for Mal yet sacrifices her own rich lifestyle to help the Serenity crew as she becomes a very resourceful member of the team. Adam Baldwin is the film's funniest character as the tough-guy Jayne who says the film's funniest lines and is all about action while feeling he can lead the crew though lacks leadership skills. Summer Glau is the film's most exciting character of River as she brings a lot of layers to role as the quiet, innocent character who can sense things while being awkwardly funny yet when she goes into fight mode, she's very dangerous as Glau is really great in the role.

Alan Tudyk is also funny as the timid yet smart pilot Wash who has some great lines while being the husband for Zoe as he is the right-hand man for Mal in the cockpit as Tudyk delivers one of the film's funniest lines, "I am a leaf on the wind". Gina Torres is great as the tough Zoe who is the only person who understands Mal the most despite his flaws while is the most serious character while being wife to Wash. Nathan Fillion is great in the role of Mal as a ship captain who doesn't know everything yet is trying to lead his crew through good and bad. Fillion really commands the film though really acts more like a team player as he has great chemistry with his actors as he acts like a tough guy who has heart though he doesn't want to use it at times.

Serenity is a fun and truly imaginative sci-fi film from Joss Whedon. Armed with a great cast, amazing visual effects, and witty dialogue, it is definitely a film that does a whole lot more for the genre. Particularly as it will give viewers, who hadn't seen Firefly the chance to get to know these characters. The film is definitely one of Joss Whedon's great creations as it's truly one of his most essential works. In the end, Serenity is an adventurous film from Joss Whedon.

Great review. If you've read mine on my site then you know that I loved the film, too. One professional critic referred to it as "the kind of film that George Lucas used to make and that his fans wish the prequels would have been."

This was a film that grew on me after through repeated viewings and then discovering the show Firefly which I love. It's the characters that made me enjoy the whole thing. How can anyone not love someone as witty as Mal or a bumpkin like Jayne or someone as sweet as Kaylee? Wash is my favorite character.