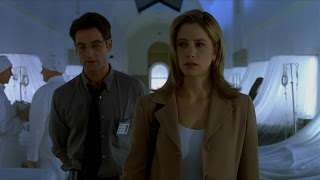 Based on the short story by Donald A. Wollheim, Mimic is the story of a scientist who creates an insect that ends up creating a new breed of giant insects that terrorizes the NYC subways. Directed by Guillermo del Toro and adapted into script by del Toro and Matthew Robbins, with additional work from John Sayles and Matt Greenberg, the film is an exploration with del Toro’s fascination with creatures and how humans try to play with science. Starring Mira Sorvino, Jeremy Northam, Alexander Goodwin, Giancarlo Giannini, Josh Brolin, Charles S. Dutton, and F. Murray Abraham. Mimic is a chilling yet stylish horror film from Guillermo del Toro.

In order to stop an epidemic that would leave part of New York City sick, an entomologist named Susan Tyler (Mira Sorvino) carries a new cross-breed of termite and praying mantis to kill the cockroaches carrying the disease. The plan is a success as she and CDC agent Peter Mann (Jeremy Northam) become heroes until three years later when a series of mysterious deaths occur. With Susan working at a lab and Peter still working with the CDC with friend Josh (Josh Brolin) uncover mysterious bacterial droppings at a church. When a couple of boys present Susan with a mysterious bug, she discovers it was the Judas Bug that she had created but couldn’t believe since it wasn’t supposed to live for more than six months.

When she and Peter go to the subway to find where the boys found the bug, they’re stopped by transit police officer Leonard (Charles S. Dutton) who wants a permit. While Susan turns to her old mentor Dr. Gates (F. Murray Abraham) for advice, Peter and Josh bring permits to uncover what was found as Leonard reluctantly helps them. When Susan’s colleague Remy (Alix Koromzay) reveals something that her friend Jeremy (Norman Reedus) found, Susan realize what is going on. Meanwhile, an old man named Manny (Giancarlo Giannini) tries to find his autistic son Chuy (Alexander Goodwin) who he believes has been kidnapped down to the subways. After discovering what is going on, Peter, Josh, and Leonard realize that something isn’t right while Susan later gets kidnapped by one of the bugs at the subway.

After Susan later meets up with Manny and the rest of the party, Susan reveals what has happened to the Judas Bug and how it evolved. Hiding in a subway, the gang realizes what they must do to survive and how to end this growing horde of Judas Bugs that might be wreaking havoc all over New York City.

The film is essentially a horror story about a scientist who intention to stop a breed of disease-carry cockroaches only has her dealing with a bug that would mimic its prey to survive and evolve. When she and her husband along with a few people realize what it’s doing, they have to stop it or else it would create new generations of creatures that would wipe out humanity. It’s a story that is sort of typical of horror films where people play with science, despite good intentions, only to have to kill what they create. Screenwriters Guillermo del Toro and Matthew Robbins do manage to create moments where they know how to build suspense and create characters that are compelling. The only character that doesn’t work is the autistic kid Chuy who is this MacGuffin for one character to try and retrieve but ends up causing lots of trouble for some of the characters to survive.

Guillermo del Toro’s direction is indeed very stylish for the way he creates an atmosphere for the look of the film. Notably as it plays to his interest with monsters and insects as the film does have an air of innocence to the way Susan reacts to these creatures until her encounter with this baby version of the Judas Bug. Featuring entrancing yet claustrophobic compositions of the subway scenes as well as lush crane shots of some of the locations. The direction of del Toro does know how to maintain suspense and create these chilling moments. The only problem is that there’s not enough for del Toro to go more out there despite some of the dramatic stakes that happens in the film. While it’s a film that is quite typical of a lot of late 90s horror films, del Toro was able to create a film that is engaging and scary.

Cinematographer Dan Laustsen does excellent work with the film‘s colorful style that is awash with blue and yellow lighting schemes for many of the film‘s dark interiors along with some entrancing shots for its exterior shots. Editors Patrick Lussier and Peter Devaney Flanagan do nice work with the editing by utilizing stylish rhythmic cuts to play up the suspense along with slow cuts to help build up the suspense. Production designer Carol Spier, along with set decorator Elinor Rose Galbraith and art director Tamara Deverell, does brilliant work with the set pieces created such as the subways and the dark tunnels to help create a world that is truly a fright to be in.

Costume designer Marie-Sylvie Deveau does good work with the costumes as it‘s mostly casual with exception of the uniform worn by Leonard. Visual effects supervisor Brian Jennings does terrific work with the design of the Judas Bug creatures that look nearly human while they also have this very disgusting look to them with the actual makeup that is created. Sound editors Phil Benson and Robert Shoup, along with sound designers Randy Thom and Steve Boeddeker, do superb work with the sound to help create suspense as well as some eerie sound effects for the noise of the bugs. The film’s score by Marco Beltrami is wonderful for the bombast orchestral flourishes it creates for some of the film’s intense moments as well as more calm yet brooding pieces to build up the suspense.

The casting by Kerry Barden, Billy Hopkins, and Suzanne Smith is incredible for the ensemble that is created as it includes James Costa and Javon Barwell as two young bug collectors Susan befriends along with Norman Reedus as the eccentric Jeremy, Alix Koromzay as Susan’s friend Remy, future del Toro collaborator Doug Jones as one of the creatures, and F. Murray Abraham as Susan’s wise mentor Dr. Gates. Josh Brolin is very good as Peter’s CDC friend Josh who often has some funny lines about his job while Giancarlo Giannini is also good as Chuy’s shoeshine father Manny. Alexander Goodwin is OK as the young autistic boy Chuy although it’s a performance that becomes annoying towards the third act as he is just this unnecessary MacGuffin.

Charles S. Dutton is wonderful as transit cop Leonard who always has some funny lines while being the guy who reluctantly helps Peter and Susan fight off the bugs. Jeremy Northam is excellent as Peter Mann who tries to discover about the creatures while having to be this nerd that has to fight off these creatures. Finally, there’s Mira Sorvino in a superb performance as Susan Taylor who tries to figure out these bugs while realizing what she’s done to create all of this chaos.

Exclusive for a Blu-Ray release, the Director’s Cut of Mimic is a reconstruction of sorts from Guillermo del Toro to present the film that he wanted to show instead of the theatrical cut shown back in 1997. Whereas the original cut had a running time of 105 minutes, the director’s cut expands the film a bit with six additional minutes. Though not much has changed story wise, there are a few things del Toro added to the story while taking away a lot of second unit shots and some minor dramatic subplots to add more weight to the story.

A lot of the changes occur in the film’s first half where there’s a few additional scenes involving Peter Mann and Josh finding more things in the church that includes an extended conversation with an Asian cop over what was seen. Plus, there’s a few additional scenes such as a different introduction to the Remy character without her man drama as well as a small scene where Peter and Susan have lunch before he leaves for work. There’s also an additional scene where the baby Judas bug is introduced in a different scene as well as a couple of more minor scenes with Norman Reedus’ Jeremy character and how discovers a dead creature in the sewers. Another minor scene that adds dramatic weight is an expanded piece of Susan and Jeremy awaiting a pregnancy test where the results are revealed.

It’s not just some of the dramatic elements of the story that del Toro improves a bit as well as removing a lot of second unit work that was partially shot by Robert Rodriguez. The film’s original look was drenched with a lot of sepia coverage that added a more entrancing style to the film. For the director’s cut, del Toro strips away a lot of that in the non-dark subway scenes to add a more straightforward look that is still beautiful. The visual effects improve a bit as it’s more polished in its look though retains some of its wobbliness. The pacing in the film remains the same though it does move a bit faster without making it much longer. Overall, the director’s cut of the film does slightly improve things a bit in terms of its look and more focus on the story. Still, it doesn’t improve on the other flaws of the film such as the Chuy character which is still an annoying MacGuffin.

Mimic is a decent horror-suspense film from Guillermo del Toro that does feature some noteworthy performances from Mira Sorvino, Jeremy Northam, Josh Brolin, Giancarlo Giannini, and Charles S. Dutton. While it is definitely the weakest film of del Toro’s film career, it is still a film that does a lot more than what is expected in the genre. Of the two versions available, the one to get is the director’s cut though there’s not much difference from what is presented in its original theatrical version other than its look and a bit more weight in its dramatic tone. In the end, Mimic is a pretty good and enjoyable horror film from Guillermo del Toro.

I'm probably not going to watch the new version of this. I thought the original was a decent film, but nothing that special. I felt the length of the scene with the insect on the kid went on too long. Of course, the fact that it bothered me could be interpreted to mean that it was particularly effective.

I actually do recommend the director's cut a bit more since I think the pacing is a bit improved and established more stakes in the film.