Smiles of a Summer Night

Originally Written and Posted at Epinions.com on 5/25/09 w/ Additional Edits. 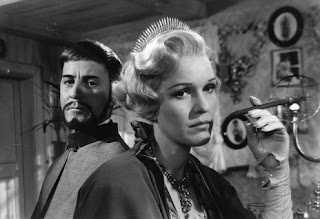 Written and directed by Ingmar Bergman, Sommamattens leende (Smiles of a Summer Night) tells the story of a lawyer at the turn of the century who is married to a 19-year old virgin while his adult son, from a previous marriage is becoming a priest. When he meets a former mistress during a play, she invites him, his wife, son, and some friends for a party in her summer home for one night only. A film that is a comedy in some respects but also filled with Bergman's themes of morality. It would be the film that would help give audience a taste of what is to come from the director, though in a different style. Starring Ulla Jacobson, Gunnar Bjornstrand, Harriet Andersson, Eva Dahlbeck, Margit Carlqvist, Jarl Kulle, Bibi Andersson, and Birgitta Valberg. Sommamattens leende is an excellent, funny film from Ingmar Bergman.

Fredrik Egerman (Gunnar Bjornstrand) is a respected lawyer who is married to 19-year old ingenue named Anne (Ulla Jacobson). Things seem to go well in their life while Fredrik's son Henrik (Bjorn Bjelfvenstam) just passed an examination to become a priest. Living with the Egermans is a young maid named Petra (Harriet Andersson) who often flirts with Henrik. When Fredrik receives tickets for a play starring Desiree Armfeldt (Eva Dahlbeck), it is learned that she is a former mistress of Fredrik just after his first wife had passed away some years ago. During a nap, Fredrik says Desiree's name that bothers Anne while at the play, Anne is distressed as they leave early. Henrik is frustrated over his feelings for Petra believing he has sinned. After that night, Fredrik decides to see Desiree for a chat. Accompanied by Desiree's maid Malla (Gull Natorp), the go to Desiree's home where Fredrik asks for Desiree's help while learning she has a son named Fredrik (Anders Wulff).

Later that evening, a young man named Malcolm (Jarl Kulle) arrives to meet with Desiree but is upset that Fredrik is there. Malcolm is a young Count who is set to leave for war soon while his wife Charlotte (Margit Carlqvist) is a gossip monger. Desiree has an idea during a visit with her mother (Naima Wifstrand) to have the Count and his wife plus the Egermans for a day in the summer at the home of Desiree's mother. Anne decides to go after a visit from Charlotte, who knows that her husband is having an affair. At the house, Petra accompanies the Egermans where she meets Mrs. Armfeldt's servant Frid (Akie Fridell). Anne and Desiree meet as the Count and his wife arrive to the mansion as everyone meets. Charlotte meets with Desiree for a plan of her own. What happens at dinner would reveal some unresolved feelings and desires for all involved. Even as Frid reveals to Petra the three things that happen on a summer night for those who become couples and those who have to figure some things out.

While Bergman throughout his later films would tackle themes of morality, faith, and love in a more cynical, darker presentation. Bergman also can present films with a sense of humor in these subject matters. In this film, it's about a lawyer dealing with old feelings of his mistress as well as his love for his wife. At the same time, his wife is bored with all that is going on while having some repressed feelings of her own while learning about her husband's past with his mistress. While all of that is going on, there's a jealous count, his angry wife, and the lawyer's repressed son who is disgusted by all that is happening.

Bergman's script has a nice structure where the first act introduces Fredrik's life as well as his past with Desiree while being introduced to the jealous Count Malcolm. The second act is about Desiree's plan for a party at her mother's house and Charlotte's plan to expose her husband. All that is well told though it suffers through some pacing issues and trying to keep the story going. Even as it tries to mix comedy and drama that is finally balanced in the third act where everything goes on at the house. Its third act becomes the film's payoff in terms of its spontaneous humor and dark drama, the latter of which would become Bergman's trademark for all of his films to come.

The direction is mostly straightforward in comparison to Bergman's later films which often has striking compositions and eerie camera movements. Still, there's some memorable shots in the film as he creates. Notably the ending that involves Petra and a character commentating all that is happening. While the staging of the drama is mostly theatrical, there's some humor that goes on while in terms of the acting. It's all done in an early 1900 style where the body language shows the characters bowing to each other as a form of introduction. In the more intense, heavy dramatic scenes, there's some great close-up of the characters through zooming close-ups to reveal what is going on as well as its sense of emotional impact. Despite a few flaws in the story and pacing, Bergman does create a solid, whimsical comedy about love and morality.

Bergman's then-longtime cinematographer Gunnar Fischer does excellent work with the film's black-and-white photography. Notably in the nighttime scenes at the mansion with some great, haunting interior shots to capture the mood of the dinner scene. Even in the exterior, there is a beautiful yet dark quality to his camera work. Fischer's shading in some of the nighttime and daytime exteriors are well-made as he brings something that is exquisite in its look and feel. Editor Oscar Rosander does some nice work with the film's smooth transitions with straight cuts, fade-outs, and dissolves to give the film a nice feel though its pacing at times, lags the film a bit in its humor and drama.

Production designer P.A. Lundgren does fantastic work with the lavish homes that the characters live in with such detail to early 20th Century antiques and furniture along with the chairs. The look of the sets and decorations are filled with elegant details along with the use of candles with dripping wax as it's one of the film's technical highlights. The costume design work of Mago is very exquisite with its flowing, large dresses and hats of the times along with the suits that the men wear. The sound work by Per-Olof Pettersson and Lennart Wallin is very good in capturing the raucous sounds of the theaters and the quiet atmosphere of the Armfeldt mansion. The music by Erik Nordgren is wonderful for its upbeat, flowing arrangements filled with comical pieces and huge, triumphant pieces with large arrangements. Even in the more romantic scenes, there's something that is somber of what goes on as it plays well to its humor and drama.

The cast is well-assembled with some memorable small roles from Anders Wulff as Desiree's son Fredrik, Gull Natorp as Desiree's assistant Malla, Jullan Kindahl as Anne and Fredrik's cook Beata, and in early film roles, Birgitta Valberg and Bibi Andersson as actresses on the stage. Naima Wifstrand is very good as Mrs. Armfeldt, Desiree's mother who comments all the things wrong with the world including the young people of its time. Ake Fridell is great as the lively Frid, a man who is so full of charm as he wows the young Petra over his lust for life and all of the things that makes the world good. Bjorn Bjelfvenstam is excellent as Henrik, Fredrik's 19-year old son who wants to be a priest but struggles against the dark ways of the world as well as his feelings for women. Jarl Kulle is good as Count Malcolm, a young jealous military officer who wears a stupid mustache while couldn't hold his feelings for both Desiree and his wife Charlotte.

Margit Carlqvist is great as Charlotte, a young, scorned wife who is aware of her husband's affairs as she hopes to get revenge on him by seducing Fredrik. Harriet Andersson is wonderful as the lively, flirtatious maid Petra, who likes to bare her cleavage to Henrik. Ulla Jacobson is very good as Anne, the young virginal wife of Fredrik who is confused after she hears him say Desiree's name in his sleep as she also has some repressed feelings for someone else around her. Gunnar Bjornstrand is excellent as Fredrik, a man who is confused over his love for Anne but his feelings for Desiree while dealing with all of the chaos that surrounds him during a night at the Armfeldt mansion. Finally, there's Eva Dahlbeck in a fantastic role as Desiree, a lively woman who realizes she still has feelings for Fredrik while trying to contend the jealousy of Malcolm as she makes a move that would change everything.

Sommamattens leende is an excellent, whimsical comedy from Ingmar Bergman featuring a superb cast led by Eva Dahlbeck, Gunnar Bjornstrand, Ulla Jacobson, and Harriet Andersson. While the film may not have the serious, heavy themes of other films that would follow, it's a film that shows Bergman's versatility in the themes and genres he explores. In the end, while it may not reach the heights of his later, more-well known films, Sommamattens leende is still a fascinating, entertaining film from Ingmar Bergman.

Lovely review. Bergman is my favorite filmmaker, so I LOVE reading posts like these about his films. "Fascinating and entertaining" indeed. It's so funny to watch this and consider that two short years later, Bergman become so well known for his heavy-handed dramatics. But Smiles is proof of the man's whimsical sense of humor.

This was a real surprise for me when I first saw it a few years ago. I was expecting something more serious but ended up enjoying myself.

I need to see it again and get the Criterion DVD.