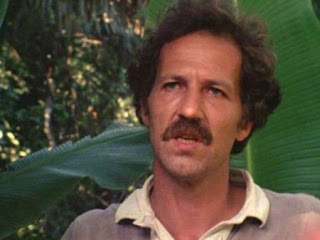 1982's Fitzcarraldo by Werner Herzog and starring Klaus Kinski and Claudia Cardinale was considered to be one of the most ambitious films ever made. Largely due to its plot of an opera-loving baron who seeks to exploit an unclaimed part of land while getting his steamboat dragged by Amazon natives on top of a mountain. Despite the film's international acclaim and success, the film was years in the making with cast changes and production problems that the story behind the making of the film was even more interesting. It was there that documentary film director Les Blank released a film about the making of Fitzcarraldo called Burden of Dreams. Starring Herzog, Kinski, Cardinale, along with Mick Jagger, and Jason Robards. Burden of Dreams is a superb, intriguing documentary about all the troubles that goes on behind the world of filmmaking.

After a year of pre-production, Werner Herzog and his film crew travel to the Amazon for locations scouting for his film entitled Fitzcarraldo. Part of the film's story would involve dragging a steamship on top of a mountain as Herzog and his team found the location they needed. The only problem is that they encounter a border dispute between Indian tribes and the government forcing Herzog to postpone the shoot for a year. Finally in 1981, Herzog was able to shoot in Iquitos, Peru for the film as he got his cast ready as it would star Jason Robards as the titular character and rock singer as his assistant Mick Jagger. With 40% of the film shot and things seemed fine, Robards became ill as he had to return to the U.S. for medical reasons as he never came back to Peru due to his illness. The production was halted for six weeks as Jagger had to leave production due to his touring commitments with the Rolling Stones. In April of 1981, Herzog brought in Klaus Kinski, whom he had already collaborated in three films by this time, to replace Robards while Jagger's character was cut out of the film. Re-shooting all of the scenes in Iquitos, Herzog found the steamboat he needed as he as he also rented two steamboats to make them identical as filming continued with Kinski and Claudia Cardinale.

Herzog also found a new group of Indian tribes to work with while doubling their wages to continue doing their other work. Still, the shoot dealt with problems due the end of rain season where Herzog and crew had to shoot in the mildly dangerous currents of the Pachitea river while the other boat was in the Ucayala Falls. Things were still troubling over tension between differing tribe members while the planning for the steamboat dragging sequence proved to be daunting. Even as a rented bulldozer couldn't help create the slope Herzog needed as he's running out of time and money as the production got longer than he anticipated. While also dealing with restless natives as a missionary priest tries to ease the tension, Herzog and his team tried to stay away at another camp as Kinski complained about the boredom that is happening. With the slope finally completed, a Brazilian engineer is asked to figure how to drag a ship on top of a mountain as he later quit over its problems. After a first attempt where the cable breaks, Herzog reveals his love/hate relationship towards nature believing that nature is winning. Though filming is able to continue despite the on-going trouble in the production that included the treacherous rapids sequences. Herzog contemplates about making another film as the shooting of Fitzcarraldo finally finishes in November of 1981.

While many people will know that making a film isn't easy but what Les Blank and his co-director Maureen Gosling revealed is how far a director will go to achieve his dream and how far he's willing to take himself. Though Herzog isn't entirely portrayed as an egomaniac, he is willing to himself to reveal his personality, flaws and all. There's parts of him that is caring and sensitive and there's another side of him that can be insensitive and delusional at times. Still, Blank and Gosling reveal all the troubles in which Herzog had to go through. From the border disputes between tribes and the Peruvian government to the battle with nature on trying to get the steamboat on top of a mountain as well as trekking through the Amazon. It's more than the typical, behind-the-scenes kind of mini-film that would often be seen on TV specials or as extra features on a DVD. What Blank unveils is what could go wrong in a movie definitely goes wrong and how Herzog persevered through the challenges.

While the entire film isn't perfect since there's a few parts that drag, the documentary is sobering in how the tribes and local react to being apart of this project. The reaction was indeed mixed where though they like the money and being apart of something grand, they didn't expect it to be that hard or to come into a situation that is tense. With Blank serving as the cinematographer, he goes deep into the contrasting world of the camps that the tribes lived in and where the cast and crew lived since Herzog didn't want to impose the culture of his camp onto theirs. The interviews with Herzog, Kinski, Paul Hittscher, Thomas Mauch, Miguel Angel Fuentes, Jose Lewgoy, various crew members plus locals reveal the atmosphere and the culture of the Amazon. While Herzog doesn't want to maintain or exploit their culture, he does his best to get the tribe into getting their land where by the end of the film, the final credits revealed that the tribe is still struggling to get their land.

Then there's the narration written by Michael Goodwin as it reveals the troubles of the film and what was going on during the months of filming. It's a wonderful narration in its insightful, sobering effects of how weather, locations, and politics can cause problems during filming. Then there's the role of Maureen Gosling whose editing and sound work reveal the tense atmosphere of the areas while her editing, revealing several amounts of footage shows the complexity of the Amazon as well as everything that goes in the film. It's superbly edited while it reveals the two lost scenes with Jagger and Robards including a scene of the two actors calling out wanting an opera on top of a church. Those two scenes reveal what was left since the remaining footage was lost. Other footage in the documentary, particularly between Herzog and Kinski is revealed more in Herzog's 1999 documentary about his collaboration with Kinski called My Best Fiend.

Burden of Dreams is marvelous documentary from Les Blank that chronicles the production of Fitzcarraldo. Fans of Herzog's film will no doubt want to check this film out to see how far Herzog was able to reach the impossible for this film. Particularly as it gets very close to the filmmaking process and how ambitious production can lead to trouble. It's a very engaging and hypnotic documentary to see what had to be done to do the impossible as Burden of Dreams is a truly intoxicating documentary from Les Blank

Nice one. I love Fitzcarraldo and know all about the story but still haven't seen this doc yet. I'll have to find it soon.

It's still available on Criterion. It was on the Movie Channel and other Showtime-related channels.