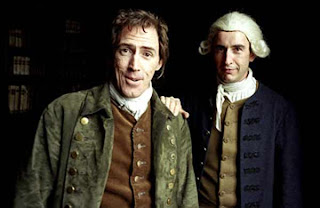 Based on the novel Tristram Shandy by Laurence Stern, Tristram Shandy: A Cock & Bull Story is about the making of a film adaptation of Tristram Shandy where cast and crew deal with the impossible task of filming a novel that is deemed un-filmable. Directed by Michael Winterbottom and screenplay by Frank Cottrell Boyce (under the Martin Hardy pseudonym), the film explores the story of Tristram Shandy as well as film's crew attempt to try and make this impossible film told by its lead actor Steve Coogan who plays the titular character along with Tristram's father and as a version of himself. Also starring Rob Brydon, Jeremy Northam, Ian Hart, Gillian Anderson, Kelly MacDonald, Naomie Harris, David Walliams, Dylan Moran, Keeley Hawes, James Fleet, Mark Williams, Stephen Fry, Kieran O'Brien, and Winterbottom regular Shirley Henderson. Tristram Shandy: A Cock & Bull Story is a witty satire from Michael Winterbottom.

Tristam Shandy talks about his own life and how his uncle Toby (Rob Brydon) got wounded where Tristam later received a similar injury when he was a child (Joe Williams). After discussing his birth and how he was conceived, the birth scene becomes a disaster as its director Mark (Jeremy Northam) is unsatisfied by the results. Steve Coogan and Rob Brydon (as himself) go on break they argue over shoe sizes and height while the assistant director Ingoldsby (Mark Williams) frets over historical accuracy. Often accompanied by production assistant Jennie (Naomie Harris) and trying to be attentive to his girlfriend Jenny (Kelly MacDonald) and their baby, Steve works with Mark and screenwriter Joe (Ian Hart) try to figure out how to tell the story as they realize the difficulty in leaving things out. After an interview with Tony Wilson where Steve reveals what won't be covered, Wilson is enraged over the Widow Wadman story not being filled as Steve later deals with a journalist named Gary (Kieran O'Brien).

Dealing with his attraction towards Jennie, who reveals about a drunken affair they had the previous night, Steve tries to deal with all of the chaos of filming as the rushes for the battle scenes turned out not to be very good. Finally deciding to put the Widow Wadman story in the film, Steve suggests to producer Simon (James Fleet) to get Gillian Anderson for the part. Anderson accepts the role much to Rob Brydon's anxieties as he has a crush on Anderson. Everyone becomes nervous about Anderson's involvement while Rob learns his part is being expanded as Steve is fretting over that as well as Jennie's flirtations. More importantly, everyone else wonders how will this impossible story will be received as the final film.

It's true that adaptations and even biographies are hard to make into films, especially since they feature stories and subplots that readers seem to love. What Michael Winterbottom and his longtime screenwriter Frank Cottrell Boyce tried to do was make two different films. The first act being about Tristram Shandy and then the second act about making the film and the third is about the business of trying to make Tristram Shandy. While Boyce's structure is interesting along with its knack for British humor, the structure and humor isn't for everyone though Winterbottom brings a lot of satire to the film's second and third act. While the first act is an interesting yet funny film about a man's life, during the second and third act, it reveals that the life of this man is filled with so many stories. Especially in a 94-minute film is impossible to tell where it's hard to make the story of a man like Tristram Shandy where the film becomes a satire of where everything in the world of filmmaking goes wrong due to the egos of actors, the accuracy of costumes, and everything in between. The result is a funny, witty satire from Winterbottom and Boyce.

Cinematographer Marcel Zyskind does wonderful work with varied styles of photography to the arty, artificial style of Tristram sequences and scenes to the more documentary, hand-held approach towards the rest of the film. Production designer John-Paul Kelly and art director Emma MacDevitt do wonderful work in creating the period style of the 18th Century for the Tristram sequences while costume designer Charlotte Walter also does fine work in the look of the costumes where it's purposely is made to look foolish. Editor Peter Christelis does excellent work in playing with the film's structure while giving it a leisurely-pacing feel. Sound recordist Stuart Wilson does some excellent work in creating the sound to convey the atmosphere of the times and the documentary-style of the making-of stuff. The film's music is filled with an array of classical pieces from Antonio Vivaldi, Nino Rota, and Johann Sebastian Bach along with additional pieces from Michael Nyman and Edward Nogria.

The film's cast is wonderfully assembled with several actors playing themselves or caricatures of the film crew and producers. Featuring small yet notable and funny performances from Mark Williams as a historically-accurate assistant director, Keeley Hawes as Elizabeth Shandy/herself, Shirley Henderson as Susannah/herself, David Walliams as the hilarious parson, Stephen Fry as an eccentric historian, Paul Kynman as Shandy's assistant Obidiah, Dylan Moran as the dim Dr. Slop, Raymond Waring as cousin Trim, and Kieran O'Brien as the journalist Gary. Ian Hart is pretty funny as the screenwriter Joe who tries to re-write everything while Mark Hadfield is also good as another journalist named Leo. James Fleet and Jeremy Northam are excellent in their respectful roles as the producer and director Mark where Northam is really making fun of Michael Winterbottom. Tony Wilson and Gillian Anderson are excellent in their cameos as themselves with Anderson doing a great job as Widow Wadman. Joe Williams and Conal Murphy are really good as the child Tristram with their arrogant personality in believing that they're better actors than Steve Coogan.

Kelly MacDonald is wonderfully sweet as Coogan's girlfriend Jenny while Naomie Harris is witty as Coogan's assistant Jennie. The film's best supporting performance goes to Rob Brydon as Uncle Toby and himself. Brydon is the best comedic foil to Coogan as a supporting actor who suddenly is getting more attention to Coogan while dealing with the upcoming appearance of Gillian Anderson. Brydon steals every scene he's in as he also does some hilarious impressions of American actors. Finally, there's Steve Coogan in one of his funny roles as Tristram, his father, and himself. Coogan is truly a comedic genius with his straight-manner in how he narrates and tells the story while allowing himself to be humiliated in strange situations. This is truly Coogan's film as he brings the same kind of energy and wit that he did in 24 Hour Party People.

Tristram Shandy: A Cock & Bull Story is a fascinating, witty film from Michael Winterbottom and company. Though some might not get the film's British humor, fans of British comedy and the satire of filmmaking will indeed enjoy this. Thanks in large parts to the comedic talents of Steve Coogan and Rob Brydon along with their supporting cast, it's a film that no doubt has the Winterbottom wit. Sadly, this film also marked the end of Winterbottom's collaboration with screenwriter Frank Cottrell Boyce where the two fell out during the making in which Boyce chose the Martin Hardy pseudonym. Still, Tristram Shandy: A Cock & Bull Story reminds them of their talent and great collaboration as writer and director.