Originally Written and Posted at Epinions.com on 6/24/07 w/ Additional Edits. 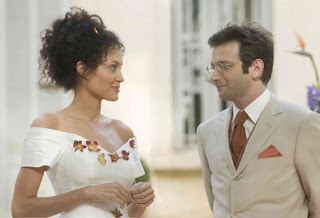 Following the attacks of 9/11/01 and the uproar over terrorism that included Al-Qaeda and other terrorists affiliates in Afghanistan and parts of Pakistan. There was a frenzy in the world of journalism on information into what was going on. The motives, who were people working for, and such. One of those journalists who was in Pakistan covering the world of terrorism was American journalist Daniel Pearl. In late January 2002, Pearl was kidnapped by a terrorist group on his way to interview a terrorist leader. Pearl was later killed on February 1, 2002 just days after photos of him handcuffed and with a gun to his head were shown. His body cut into pieces, and the horror of his death sent shockwaves around the world. Around this time, his wife Mariane was pregnant with their son Adam who would be born later in May 2002. A year later, Mariane Pearl released a memoir about her husband's life and death in the book entitled A Mighty Heart where years later, it's become a film of the same name.

Directed by British auteur Michael Winterbottom with an adapted script by John Orloff with screen story credit by Sarah Crichton. A Mighty Heart tells the story of Daniel and Mariane Pearl's time in Pakistan following the attacks of 9/11 that would eventually led to Daniel Pearl's death. The film is a detailed account based on Mariane Pearl's memoirs and the time of her husband's death. Playing the roles of the couple are Capote screenwriter Dan Futterman and Angelina Jolie in their respective roles of Daniel and Mariane Pearl. Also starring Archie Panjabi, Jillian Armenante, Irfan Khan, and Will Patton. A Mighty Heart is a powerful yet harrowing drama from Michael Winterbottom.

Following the attacks of 9/11 and the war against Al-Qaeda and the Taliban in parts of Pakistan, journalists all over the world are covering the war on terror as well as terrorism itself. Among them are the Pearls, Wall Street journalist Daniel Pearl and his French-born, multiracial wife Mariane, who is pregnant with their child. Living with another Wall Street journalist in Asra Nomani (Archie Panjabi) in Karachi, Pakistan, Daniel Pearl uncovers a possible link between a terrorist organization in Pakistan to the shoe-bomber Richard Reid, who tried to blow up a plane. On January 23, 2002, Daniel Pearl leaves for another typical assignment as he hopes to meet contacts to a man named Sheikh Gilani (Ikram Bhatti). He would never be seen again where on that day, Mariane went shopping for dinner waiting for her husband.

The next day, he doesn't come home as Mariane, Asra, and others wonder where is he as they call the police to report him missing. A police captain (Ifran Khan) is called upon to supervise the investigation with help from FBI agents Maureen Platt (Jillian Armenante) and Randall Bennett (Will Patton) who met Daniel on the day he disappeared during Daniel's meeting on whether or not he should meet the contact. The suspicions arises when everyone tries to find out where is Daniel and if he's alive. Finally, photos of him had surfaced through suspicious emails claiming to have Daniel Pearl in custody. The captain goes further into the city of Karachi as he tries to find the locations of computers and such. Wall Street journalist Steve LeVine (Gary Wilmes) and editor John Skelton (Demetri Goritsas) join in to help Mariane.

With Mariane often contacts Daniel's parents Judea (Jeffry Kaplow) and Ruth Pearl (Perrine Moran) for news, she helps along in the investigation since she too, is a journalist. When Sheikh Gilani is caught, the captain and Bennett learn that Gilani is not the man but bait. Another contact Daniel was supposed to meet for Gilani was a man named Bashir whose real name is Ahmed Omar Saeed Sheikh (Aly Khan). After capturing several associates, the captain learns that Omar has been caught already as he is interrogated to see if he knows where Daniel is. Time goes by when finally, a video tape was surfaced through a Pakistan journalist giving it to an American when the truth is uncovered breaking the hearts of everyone including Mariane.

A film like this based on a real-life tragedy could've been handled with a heavy-handed approach into melodrama. Fortunately, in the hands of the very prolific Michael Winterbottom. The film doesn't stray into traditional or conventional, Hollywood territory of huge dramatic moments and endings that aren't realistic. With John Orloff's adapted script based on Mariane Pearl's novel, the film is less plot-driven but rather plays itself as an unconventional thriller filled with suspense of what happens. While the audience knows what happens in the end, Michael Winterbottom goes for the same documentary-like style to tell the story. While the cinema verite style might not be everyone's cup of tea, the immediacy and intensity of Winterbottom's direction makes it feel like the audience is watching everything unfold.

The direction of Winterbottom with the film shot in India, rather than Pakistan for security reasons, is wonderfully handled. While not much is revealed on the film's politics though the film opens with reports of the world following the events of Pakistan. The film is not about politics but rather about this woman trying to cling on to some kind of hope that her husband is alive only to be wrecked by tragedy. Yet, the aftermath of Daniel's death shows it strength in the character of Mariane who gives a fascinating speech about terror that isn't preachy at all. Even the use of flashbacks about Daniel and Mariane's life shows the strength of that character. While the film has shots of Karachi, the locations as well as the hand-held camera style really gives the film a unique style that wouldn't work by Hollywood standards or in the hands of lesser director. In the end, it's Winterbottom's strength as a director and his unique style that brings a lot of attention to the film's story and drama.

Cinematographer Marcel Zyskind and his digital-camera photography really adds nuance to many of the film's locations with its natural, documentary-like photography on many of the film's exterior sequences. For the interior scenes, notably in the home base of the Pearls, the film looks very intimate while doesn't go into too many close-ups to capture the drama. Editor Peter Christelis does excellent work on using jump-cuts to bring an unconventional rhythm to the film's pacing while using stock footage to convey what was going on in early 2002. Production designer Mark Digby and art director Christopher Sull create a wonderful look to the home of the Pearls that include a marker board that creates a puzzle for the investigation. Charlotte Walter goes for realism in the film's look of clothes that shows the personality of Mariane and her connection to Daniel.

Makeup artist Toni G and hair stylist Adruitha Lee do wonderful work in recreating Angelina Jolie into the character of Mariane Pearl with her perm hair, dark eyes, and her unique look. Sound editor Joakim Sundstrom definitely captures the atmosphere of Karachi that includes the morning prayer blasted through the city as well as some of the film's highly, emotional moments. The film's score is by Harry Escott and Molly Nyman. Mostly using acoustic guitars to convey the suspense as well as a low-key orchestral score, the film also includes a wonderful piano piece by Nyman that reveals the film's emotions and Mariane's love for Daniel.

The film's cast is wonderfully assembled that features small performances from Denis O'Hare as John Bussey, Zachary Coffin as Matt McDowell, Jillian Armenante, Perrine Moran, Jeffry Kaplow, Demetri Goritsas, Gary Wilkes, Amy Shindler as Daniel's sister Michelle, and Chad Chenouga as Mariane's brother Satchi. In the roles of the suspects, Aly Khan and Ikram Bhatti are wonderfully performed, especially for not being portrayed as villains but real-life human beings. Will Patton gives an excellent performance as Randall Bennett, the FBI agent who is part of the investigation who tries to help things out while having a funny one-liner about the investigation. Archie Panjabi gives an amazing performance as Asra Nomani, the Wall Street journalist and friend who tries to use her connections to help the investigation while being the sympathetic friend for Mariane.

Ifran Khan is also great as the captain who leads the investigation while not being afraid to be rough in order to interrogate. Khan brings a presence that is very alarming to the film as a man who wants to do what is right for not just Mariane but his country who is starting to look real bad in front of the world. Dan Futterman is wonderful as Daniel Pearl where he's often seen mostly in flashbacks as a man who seems like a professional journalist and a good husband. Futterman definitely sells the wonderful human being that is Daniel Pearl to the way he adores Mariane and how he is with his fellow journalists.

In what has to be her best film role since her Oscar-winning performance in James Mangold's 1999 film Girl, Interrupted, Angelina Jolie definitely disappears into the character of Mariane Pearl. While some parts of Pearl's French accent may not be perfect nor does she look like Mariane. Jolie still manages to portray this woman like anyone who would go through a tragedy like this. What is more striking about her performance is how restrained she is through most of the film as she strips down all layers of her public persona and goes into character. When the moment of tragedy occurs, it's Jolie's strength in that character that is really shocking and powerful. Overall, it's a fantastic performance from Angelina Jolie.

While not up to par with films like Wonderland, 24 Hour Party People, or In This World, A Mighty Heart is still a powerful movie by Michael Winterbottom. Fans of Angelina Jolie will no doubt find her performance to be one of her best. Fans of Winterbottom will be amazed that the director didn't change his style, even to a film that is involved by the likes of Jolie and producer Brad Pitt. Yet, the film isn't about Jolie, Pitt, or Winterbottom but rather the Pearls. Daniel, Mariane, and Adam Pearl as their life may be marred by tragedy but its outcome proves that all you need is love. In the end, A Mighty Heart is a film that is mighty in itself.

Great review! I didn't like this movie too much but Jolie's performance was very touching, especially the moment after she saw the shocking video, which was definetly the most memorable part of the film.

I wasn't sure about Jolie in the role after a period of being in some bad films. After this film, she won me over.

Angelina Jolie was truly fantastic in this film, I loved it, plus I thought she looked very normal and natural, not the bombshell we are all used to!

@Diana-I think she's better when she doesn't play the bombshell. It allows her to actually be someone a bit normal and more realistic.