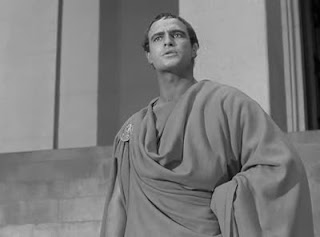 Based on the play by William Shakespeare, Julius Caesar is the story about the death of Rome’s great leader in the hands of conspirators as Romans seek revenge. Written for the screen and directed by Joseph L. Mankiewicz, the film is a homage to Shakespeare’s play as well as presenting it as a cinematic epic. Starring Marlon Brando, James Mason, John Gielgud, Louis Calhern, Edmond O’Brien, Greer Garson, and Deborah Kerr. Julius Caesar is a compelling film from Joseph L. Mankiewicz.

With Julius Caesar (Louis Calhern) rising into power, not everyone in the Senate is happy about this as Cassius (John Gielgud) conspires to rid of Caesar. After convincing Marcus Brutus (James Mason) to join in assassinating Caesar, Brutus isn’t sure as he adores Caesar though doesn’t agree with Caesar’s ambitions. After a series of meetings where Casca (Edmond O’Brien) joins the group, Brutus remains unsure as his wife Portia (Deborah Kerr) is suspicious about his behavior. After Caesar’s wife Calpurnia (Greer Garson) has a nightmare thinking that Caesar would be killed, Caesar decides to attend the Senate meeting where he is eventually killed and betrayed by Brutus. Mark Antony (Marlon Brando) witnesses the aftermath as he confronts Brutus and Cassius over what they did as he later vows revenge.

After a speech in which Antony talks about Caesar to the Romans, war emerges as Antony and Octavius (Douglass Watson) lead a revolt against Cassius and Brutus. Still haunted by his actions, Brutus deals with his own issues as the ghost of Caesar emerges. Wanting to move the army, they’re ambushed by Antony’s men prompting Cassius and Brutus to realize their fates.

The film is a dramatic telling of Shakespeare’s play of tragedy and political conspiracy that is created for the screen. While a lot of Shakespeare’s dialogue and setting is there, Joseph L. Mankiewicz’s screenplay tends to draw out some of the monologue a little too long in some scenes. Notably in the film’s first half where the conspirators make their plans where some of the monologue is engaging but at times, they tend to drag out the story. By the time the film moves into its second half, the story becomes much looser once battle starts to emerge as well as Brutus’ internal conflicts.

Mankiewicz’s direction is wonderful for the way he captures the actors with amazing close-ups and creating wide shots for some crowd scenes. Notably in the scenes where characters like Brutus, Cassius, and Antony give their respective monologues as the camera is always on them. While there’s some great direction in these monologues, the only problem is that at times. They go out for a little too long as there’s not enough interaction between characters in those scenes with the exception of Antony’s speech to the crowd. For the film’s second half involving the war, Mankiewicz does create some entrancing scenes where it involves cloudy grounds to express the sense of dread that occurs. Overall, Mankiewicz creates a solidly-crafted film that plays true to William Shakespeare’s theatrical setting.

Cinematographer Joseph Ruttenberg does excellent work with the film‘s black and white cinematography to capture the gorgeous setting of the Roman Empire along with wonderful interior shots of the Senate Halls in the film‘s climatic assassination scene. Editor John Dunning does nice work with the editing to use dissolves and fade-outs to help smooth out the transition while a lot of the cutting is very straightforward. Art directors Edward C. Carfagno and Cedric Gibbons, with set decorators Hugh Hunt and Edwin B. Willis, do brilliant work with the set pieces such as the Senate Hall and palaces the characters live in during the time of the Romans.

Costume designer Herschel McCoy does terrific work with the making of the robes many of the characters wear along with the armor for the climatic battle scene towards the end of the film. Sound mixer Robert Shirley does superb work with the sound from the way the swords move in the assassination scenes to the atmosphere of the crowd scenes. The film’s score by Miklos Rozsa is very good for its bombastic orchestral pieces for some of the film’s key intense moments along with more serene pieces for some of the film’s calmer moments.

The casting by Mel Ballerino is remarkable for the ensemble that is created as it includes appearances from John Hardy as Brutus’ young aide Lucius, Richard Hale as the blind soothsayer who warns Caesar early in the film, Alan Napier as Cicero, and Douglass Watson as Octavius. Other notable small roles include Deborah Kerr in a small but memorable performance as Brutus’ concerned wife Portia and Greer Garson in a very good performance as Caesar’s fearful wife Calpurnia. Edmond O’Brien is wonderful as Cassius’ friend Casca who takes part in the assassination plot while Louis Calhern is terrific in his small role as Julius Caesar.

James Mason is excellent as the conflicted Brutus who loves Caesar as he’s manipulated into killing him only to become consumed with guilt over what he’s done. John Gielgud is brilliant as the manipulative Cassius whose biting monologue about ambition and chaos has him stealing the film from nearly everyone. Finally, there’s Marlon Brando as Mark Antony where Brando gets a chance to show his skills as a theatrical actor while spouting great monologues with an intensity that is almost un-matched by everyone as it’s one of his essential performances.

Julius Caesar is a stellar yet engrossing film from Joseph L. Mankiewicz thanks in part to the thrilling performances of Marlon Brando, John Gielgud, and James Mason. While it isn’t a perfect film due to a few pacing issues, it is still a film that anyone interesting in acting must see. Notably for the monologues given by masters like Gielgud and Brando where they each give great lessons in the art of acting. In the end, Joseph L. Mankiewicz’s take on William Shakespeare’s Julius Caesar is a fantastic film for anyone that is interested in the art of acting.

I saw this waaaaaay back in high school. We read Julius Caeser my sophomore year and the teacher showed us this film. This was before I had any idea who Brando, Kerr, Mason, or anyone was.

Sad to say, the biggest moment that got all us boys talking afterwards was an argument over whether we had seen a bare boob in the opening credits or not. (Hey, we were 15 and there was no internet back then.)

Oh crap, that must've gotten anyone's attention. I don't think I saw a bare boob in that film. Shit, that must've been fun to watch.

I still don't know if we did or not. I only remember it was during the opening, possibly the opening credits, and it was a person walking by in a toga with the cloth covering one side, but not the other.

@Chip-It was probably an androgynous dude.