Originally Written and Posted at Epinions.com on 4/12/07 w/ Additional Edits. 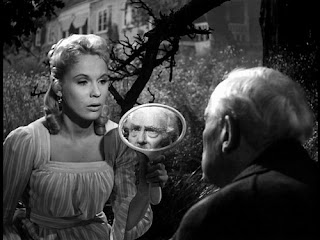 Written and directed by Ingmar Bergman, Smultronstallet (Wild Strawberries) is the story of a professor whose own life is in danger while going on the road with his daughter-in-law to receive an award. During the journey, the professor is forced to look back on his own world while being haunted by nightmares, daydreams, and his own old age. A film that questions existentialism, Smultronstallet is a film that is witty while human in the fear of age and human behaviors. Starring Victor Sjostrom, Ingrid Thulin, and Bergman regulars Bibi Andersson, Gunnar Bjornstrand, and Max Von Sydow. Smultronstallet is a surreal yet engrossing film by Ingmar Bergman.

After waking up from a haunting nightmare that involved a man without a face falling down, clocks without hands, and a falling casket. Professor Isak Borg (Victor Sjostrom) wakes up annoyed by what had happened. Making things worse is that the aging, 78-year old doctor has to go to Lund to receive an honorary degree from a university. With assistance from his longtime maid Agda (Jullan Kindahl), he has to make a trip from Stockholm to Lund via plane. Instead, Borg decides to drive instead of having his son Evald (Gunnar Bjornstrand) waiting for him. With Agda choosing to stay at home, accompanying Borg is his daughter-in-law Marianne (Ingrid Thulin) as they go on the road. During their trip, Borg discusses his thoughts on intellectualism and everything else with Marianne who feels troubled by her estrangement towards husband Evald.

They stop in the woods nearby the old childhood home of Isak. There, Isak recalls a dream where his cousin Sara (Bibi Andersson) is collecting wild strawberries for Isak and his father (Ulf Johansson) when they were fishing. Sara was someone Isak dearly loved yet, she was often being flirted by his older brother Sigfrid (Per Sjostrand). Isak sees why Sara never became his love and instead, he married a woman named Karin (Gertrud Fridh) who has died a few years ago. After the dream, Isak came across a young, virginal woman named Sara (Bibi Andersson) who is hoping to make a trip to Italy with two young men Anders (Folke Sundquist) and Viktor (Bjorn Bjelfvenstam). Isak and Marianne decide to have them join along. After nearly crashing their car in a curve with another car, they meet a couple named the Almans, Sten (Gunnar Sjoberg) and his actress wife (Gunnel Brostrom). Sten's verbal abusive towards his wife's acting and her emotions drove Marianne to the edge as she later kicks them out.

After a stop at a gas station where they meet Henrik Akerman (Max Von Sydow) and wife Eva (Ann-Marie Wiman), they remember Isak since they've considered him to be a great doctor and gave the gas free. It is nearby the gas station where Isak, Marianne, Sara, Anders, and Viktor stop for lunch as Anders and Viktor have a heated discussion over God's existence. Also nearby is the home of Isak's mother (Naima Wifstrand) lives. Isak and Marianne make an unexpected visit as she is convinced that her entire family has pretty much abandoned her. She haven't even seen her great-grandchildren where she looks coldly towards Marianne. The meeting leads to emotional issues towards Marianne as the gang continue in their trip where Isak begins to have nightmares about strange events. Notably about an affair his wife had with a man (Ake Fridell) where Isak is forced watch in horror about what did he do for all of this to happen. Finally arriving at the university, Isak tries to deal with everything he had just seen.

While this film is more of a genre-bender than his previous film, Det Sjunde Inseglet (The Seventh Seal), the journey that Bergman takes through his observant direction and multi-layered script is a fascinating one. The result is a surreal drama of this man, who starts out in the first two minutes as grouchy and cold who then becomes haunted by memories and dreams of his own life. He is also confronted by the sadness in the estranged marriage of his son and Marianne where he realizes how his own behavior has passed onto him. Even in the memories and dreams, Bergman makes the audience aware of what is going on through Isak's own eyes. The audience is aware that Isak wants to correct things and forgive people like Sara and Karin yet, is helpless. The fortunate thing about this film is that Isak finds some ounce of redemption and development through Marianne, and the three young people he encounters including the free-spirit Sara. The result through its amazing script and Bergman's entrancing direction is a film that is wonderfully entertaining and thoughtful.

Cinematographer Gunnar Fischer's black-and-white photography, notably in the film's exterior sequences, is exquisite to reveal the wonderful road landscape of Sweden. Even the exteriors from the softness of the rich, childhood of Isak's life to the cold, dark look of the opening nightmare and the test/Karin's affair sequences. Production designer Gittan Gustafsson does excellent work in creating the differing atmospheres of Isak's childhood and the cold world he's surrounded by in his own home and nightmares. Costume designer Millie Strom brings a wonderful style to the clothing to the suit of Isak, the modern-day women clothes of Marianne, and the youthful energy that Sara, Viktor, and Anders wears. Editor Oscar Rosander does great work with his dissolve cuts to move the film’s sequence-to-sequence cuts while making the audience aware of the reality and dream world. Sound recorder Aaby Wedin also plays to the film’s atmosphere that is sometimes, surrounded by Erik Nordgren's suspenseful yet dreamy score.

Per Sjostrand is excellent as Isak's flirtatious older brother Sigfrid while Jullan Kindahl is great as Isak's temperamental, loyal maid. Folke Sundquist and Bjorn Bjelfvenstam are great as the bickering young men who ask Isak about his own opinion on God while being amazed by Isak's own experiences. Gunnar Bjornstrand is in fine form as the cold, consumed Evald who cynicism about his own marriage and everything else reveals something deeper only until he sees his father.

Ingrid Thulin is amazing in her role as Marianne, Isak's distraught yet loving daughter-in-law who finds comfort in her father-in-law despite his own personality. Thulin is great as the older woman who tries to control things in the car while dealing with her own marital issues. In a dual role in playing different women named Sara, Bibi Andersson is great in her dual performances as the two women who would be different forms of affection for Isak. In the role of Isak's cousin, Andersson is more dramatic as this young woman who is trapped by Isak's flirtatious older brother and how she broke Isak's heart. In the role of the young Sara, Andersson brings more energy and spirit as a young woman caught in a triangle of sorts only to find a father figure in Isak.

The legendary Victor Sjostrom gives an amazing yet understated performance as the grouchy yet wise Professor Isak Borg. Sjostrom brings a lot of wisdom to the role as a man haunted by his own age plus the dreams and memories of his own life as he tries to deal with them in some way. When he is taken on this journey, Isak becomes a fuller character as he warms up to new people and hopes to mend the mistakes of his own life through his own family. Sjostrom's performance is a real highlight and one of the greatest in European cinema.

In the end, Smultronstallet is a witty, surreal, yet entrancing film from Ingmar Bergman. While it's not as good as Det Sjunde Inseglet, fans of road films will no doubt enjoy the journey and Bergman's narrative approach. Anyone new to Bergman will find this film as a nice place to start. For a film that blurs the world of reality and fiction, Smultronstallet is the film to see.

This was the first Bergman film I ever saw, and it literally changed my life. It will always occupy a special place in my heart. Fucking love it.

This was the 2nd Bergman film that I saw and up until Cries & Whispers, this was my favorite.

Great review! It's my favorite movie by Bergman so moving and beautiful. I was happy Thulin was in it, she is my favorite out of all of his actresses.

@Sati-After watching that film, I had a major crush on Ingrid Thulin.