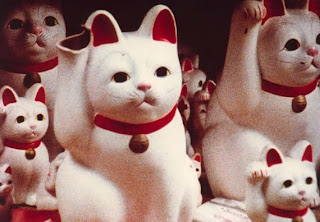 Written, directed, shot, scored, and edited by Chris Marker, Sans Soliel (Sunless) is the story of a journey from Africa to Japan to explore the world of humanity and culture in this unconventional documentary. Notably as it is a film told by a fictional character as it‘s read by another person. The result is a fascinating film from Chris Marker.

The film is essentially an essay by Chris Marker about his exploration into the world as he focuses largely on the modern world of Japan in contrast to the third-world land of Guinea-Bissau. Told in English by Alexandra Stewart, the reflective narration reveals Marker’s thoughts about the world that he sees from this very advanced and fast-moving world that is Japan where it’s struggling to maintain some of its traditions. In Guinea-Bissau, it’s a world in ruins after a war where things seem to be in transition where the people of this land remains unsure about what will happen next.

Alexandra Stewart’s narration has this very calm tone to the way she reads these letters by a man named Sandor Krasna to discuss everything Krasna has seen. The reality is that Krasna is really Marker who creates a film that crosses the line between fiction and reality. While all of the images including the distorted ones are all real, it’s the narration that further adds the idea that what the Krasna character is telling might be true. Still, it’s told in a visual essay where there’s a lot of things common and uncommon about the different parts of the world that Marker divulges into.

While a lot of the narration is told in a stream of consciousness idea as if Krasna is reflecting on all that he’s seen in this visual essay. A lot of the film is set in Japan with some of it shot in Guinea-Bissau to contrast the differing worlds and their similarities. Both seem to have an air of chaos and oppression around them but also they share values towards the tradition of their worlds. Marker’s direction is filled with wandering images of these locations and its people while often displaying shots of other places like France, Iceland, and San Francisco. The last of which to recall about a man Krasna knew who was obsessed with Alfred Hitchcock’s Vertigo.

Through it’s very stylish yet methodically-paced editing and its moody electronic score, Marker creates a film that is entrancing for the images that he captures in its natural setting while utilizing distorted yet computerized images to play up the idea of this modern world courtesy of the work by Hayao Yamaneko. With sound mixing by Antoine Bonfanti and Paul Bertault to capture the atmosphere of the locations, Marker is able to soak in the vast world that he’s enraptured himself in.

Sans Soleil is an incredible and dazzling film from Chris Marker. While it’s a film that truly defies convention and the definition of what a documentary can be. It’s certainly an engrossing film to watch for the way he is able to find similarities in landscapes and cultures that are very different. The film is definitely a must-see for anyone interested in avant-garde cinema as well as the work of Chris Marker. In the end, Sans Soleil is a stunning and ravishing film from Chris Marker.

I watched this movie last summer and was immediately taken with it as much as you are. It is definitely different and unconventional, but I was undeniably drawn to it.

It was on a couple of weeks ago on Turner Classic Movie and I decided to check it out. It was truly a one-of-a-kind film. Not easy to watch but certainly engrossing. Need to get the Criterion DVD set.

GOD, I love this movie. Just perfect. Some of the images (my favourite is the freeze frame of the African woman looking into the camera, or perhaps the children in Iceland, or maybe...) are utterly amazing. Definitely gonna see this one many more times.

@magnoliaforever-It is truly a one of a kind film. I hope to acquire the Criterion DVD set and await for more Marker films to come. I'm intrigued now.