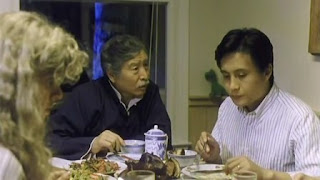 Directed by Ang Lee and written by Lee and James Schamus, Tui Shou (Pushing Hands) is the story of a tai chi instructor who emigrates to America to live with his son’s family in a New York suburb. There, he deals with his new surroundings as well as the growing differences between himself and his son. Starring Sihung Lung, Deb Snyder, and Bo Z. Wang. Tui Shou is a fascinating and heart-wrenching drama from Ang Lee.

After moving from Taiwan to America, Mr. Chu (Sihung Lung) is still trying to find his place living at the home of his son Alex (Bo Z. Wang). Though it’s been a month as his presence has been stressful for his novelist daughter-in-law Martha (Deb Snyder), Alex still believes that it is his duty to take care of his father while their son Jeremy (Haan Lee) enjoys his grandfather’s company. While Mr. Chu takes in a job to teach tai-chi to local Chinese and Taiwanese immigrants at a local community center. He stills feel lost though he is befriends the center’s cooking teacher Mrs. Chen (Lai Wang). When Martha is anxious over a review of her first novel that hasn’t been printed on the New York Times, she starts to have stomach cramps as Chu tries to ease her pain only to have her go to the hospital.

Though he’s able to connect with Mrs. Chen over their fond memories of Taiwan, he still feels lost as Martha returns to the hospital dealing with writer’s block where Chu decides to take a walk. When he doesn’t return, Alex freaks out as he tries to find his father only for Alex to wander off where Chu eventually returns with Alex drunk over everything that’s been happening. When Alex decides to have his father sent to an old folk’s home, a picnic with Mrs. Chen and her family has Chu realizing what Alex had been trying to do. Chu decides to leave on his own to Chinatown to start his own life only to deal with the fast new world of Chinese-Americans at a restaurant where he decides to make his stand.

The film is essentially about an old Taiwanese tai chi instructor who has a hard time dealing with his new surroundings as well as the culture shock he receives from his own son and American daughter-in-law. With only an elderly Taiwanese woman to connect with it, he is trying to deal with this new strange world as well as the world where it’s filled with Chinese and Taiwanese people where it still feels strange. The screenplay that Ang Lee and James Schamus creates isn’t just about culture shock but also about an old man struggling to adapt to this new world and the life that his son has. Particularly as he tries to find his role for this new world that is fast and ever-changing while his son struggles to take care of his father until it becomes too much to bear.

A lot of the film is told from the perspective of Mr. Chu while there’s also glimpses from Alex and Martha as they’re just a young couple struggling with his presence. Though Alex has work and other things to do, it’s Martha that is really annoyed by Chu’s presence though it’s really the fault for both her and Chu for not really putting any effort to try and communicate with each other despite not knowing each other’s languages. Chu is trying to believe that things will come to pass only to realize things aren’t as easy as it seems. Notably in the third act when he decides to leave home for a new life only to realize that the Chinese in Chinatown are much more problematic than his daughter-in-law. While there’s a few flaws in the story due to some of the melodrama that occurs involving Alex’s struggle with his role and Martha’s annoyance towards Chu that later has her feeling guilty. The screenplay succeeds in creating an engaging story about a man trying to find his place in a new world.

Ang Lee’s direction is truly mesmerizing for the way he lets the camera capture the tai-chi scenes as it’s ever moving in a slow yet precise manner to see how it’s done. With a lot of the compositions being straightforward, they do however say a lot in its simplistic framing. Notably the way the film opens as there’s barely any dialogue in the first seven minutes as it involves Mr. Chu and Martha just not saying anything and do their opening daily thing. Notably as there’s a scene from the outside of their house where she’s in one room typing and he’s at another room doing calligraphy all in the same frame.

Some of the film’s tai chi scenes where Lee wanted to display the kind of power Mr. Chu has is presented with a degree of style that is similar to martial arts film but in a more restrained manner. Lee also utilizes simple close-ups to display some of the healing power Chu’s tai chi has to see the differing results depending on the person. Along with some amazing shots of NYC, including Chinatown and a nearby town of NYC. Lee creates a truly rich debut film that would bear all of the hallmarks of his later work.

Cinematographer Lin Jong does nice work with the film‘s straightforward yet vibrant cinematography to capture some of the beauty of the daytime exterior and interior scenes along with some wonderful look for some of the nighttime Chinatown interior scenes. Editor Tim Squyres does excellent work with the film’s stylized editing in using rhythmic cuts for some of the film’s tai-chi demonstrations as well as dissolves and jump-cuts to play with some of the film’s rhythm. Production designer Scott Bradley and art director Michael Shaw do some fine work in the set pieces such as the Chinese community center that Mr. Chu and Mrs. Chen meet to the home of Alex and Martha that is filled with a few of Chu‘s things.

Costume designer Elizabeth Jenyon does pretty good work with the costumes from the more modern, casual clothing of Alex and Martha to the traditional Chinese wardrobe that Chu wears. Sound recordist Jeff Pullman does terrific work with the sound from the calm but tense feel of Alex‘s home to the more raucous atmosphere of the community center and restaurant that Chu works at later in the film. The film’s music score by Xiao-Song Qu is superb for its low-key yet electronic-ambient score to play up the drama along with some traditional yet serene Asian string music that pops up every now and then.

The casting by Harriet Bass, Jeff Berman, and Wendy Ettinger is excellent for the ensemble that is created as it includes small roles from Fanny de Luz as Martha’s real estate friend Linda, Hung-Chung Wang as the verbally-abusive restaurant owner that Chu works with late in the film, and Haan Lee as Alex and Martha’s son Jeremy. Deb Snyder is pretty good as the frustrated Martha although it’s a role that doesn’t have much depth while Bo Z. Wang is also good as Chu’s overwhelmed son Alex. Lai Wang is excellent as Mrs. Chen who befriends Chu as she seeks some solution to heal her ailing right arm while suspecting about why Alex and her daughter are trying to set her up with Chu.

Finally, there’s Sihung Lung in a marvelous performance as Mr. Chu. It’s a very restrained performance that allows Lung to portray a character trying to maintain a sense of dignity in a new world. There’s a bit of charm to the way Lung tries to deal with his surroundings and culture shock while he’s also this very quite bad-ass who proves that he is not the kind of guy to mess around with. It’s definitely an extraordinary performance from the late Chinese actor.

Tui Shou is a superb and compelling debut film from Ang Lee that features a remarkable performance from Sihung Lung. While it may not rank high with a lot of the films Lee would do later on, it is still an intriguing one for the way culture shock is depicted in the eyes of an old man. Notably as it also reveals the world of tai chi and its attributes to help find peace in a troubled world. In the end, Tui Shou is an excellent debut film from Ang Lee.

Sihung Lung is great in the "Father Knows Best" trilogy,Ang Lee said he had a face of a father.

I would definitely agree to that. Of that trilogy, Eat Drink Man Woman is the best of the three in terms of Lung's performance and the film itself.