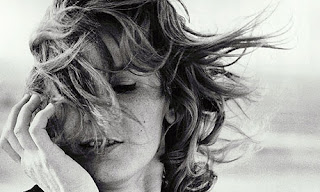 Written, directed, and shot by Chris Marker, La jetee (The Pier) is a short film about a post-nuclear time travel experiment told through still photos. Narrated by Jean Negroni, the film stars Helene Chatelain, Davos Hanich, and Jacques Ledoux. La jetee is a hypnotic yet entrancing short from Chris Marker.

A man (Davos Hanich) is asked to take part in time travel experiment in the aftermath of World War III that left Paris destroyed. Under the instruction of scientists, he takes part in this experiment where he travels back in time where he falls for a beautiful woman (Helene Chatelain) as he is entranced by her beauty. After further experiments, the scientists have him travel into the future where he meets strange people only for him to reach into his past where would revisit a memory where he saw a man die when he was just a child.

The film is essentially the story of a man who is asked to take part in a time travel experiment following a nuclear war where he falls for a woman back in time. Told through photographs and haunting narration by Jean Negron (James Kirk in English), the film’s writer/director Chris Marker explores a world where it is about memory and a man trying to return to a past he never had been in as he falls for this woman from many years ago. While it starts off with these entrancing images of a boy at a pier where he would stare at this beautiful woman. It is followed by these stark images of destruction and ruin told through grainy black-and-white photos.

Since the story is largely driven by narration and images, Marker is allowed to create a film where it doesn’t need any big movements except in Jean Ravel’s stylish editing that uses jump-cuts and dissolves to play up the action. With sound work from Antoine Bonfanti for small voices that is presented in the story as well as to play up the sound effects of the images of ruin. There is a lot of effective cutting through Marker’s direction to play up the intensity of this man’s trip through time from the way he falls for this woman to the drama that occurs when he enters the future.

The music score of Trevor Duncan is filled with soaring orchestral flourishes to play up the dark drama of the film as well as the romance between the man and the woman. The cast that includes an appearance from cult filmmaker William Klein as a man from the future as well as Jacques Ledoux as the head scientist. Yet, it is the performances of Davos Hanich and Helene Chatelain that help drive the story though they don’t move nor have any dialogue as their presence and facial expression says it all.

La jetee is an imaginative short film from Chris Marker. Thanks to amazing and gorgeous photos and a directing style that is unique in the way it tells a story. Particularly for the way it strips down the idea of visual storytelling by just using narration, music, bits of sound, and a photograph to just say something. La jetee is a truly marvelous and evocative film from Chris Marker.

Oh,I need to see this one ASAP,heard so many good things about it.

Get the Criterion DVD set that includes Sans Soleil that I just saw as I'm finishing up my review right now.

That's the movie that inspired 12 monkeys, isn't it? It sounds fascinating, I'm gonna have to see it.

@Sati-Yep, that's the film that inspired that Terry Gilliam film. It's a must-see along with Sans Soleil.

Great post on a beautiful and extremely influential movie. I've linked to it from todays Dystopian Movies post

@blahblahblahToby-Thank you. It's a film that everyone should see.