Originally Written and Posted at Epinions.com on 1/9/07 w/ Additional Edits. 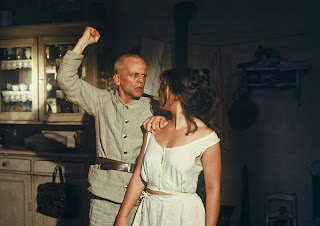 Based on a play by Georg Buchner, Woyzeck tells the story of a 19th Century German soldier whose fragility is put to the test by the abuse of soldiers, commanding officers, and his unfaithful wife. Adapted into script by Werner Herzog and starring Klaus Kinski in the title role, in their third collaboration. Directed by Herzog with Kinski returning to the role he played years ago in theater, the film is a study of a man finding himself alone in a society that's completely against him. Also starring Eva Mattes, Wolfgang Reichmann, Willy Semmelrogge, Josef Bierbichler, and Paul Burian. Woyzeck is a sprawling, theatrical study of a man trying to gain control in a world that's completely against him.

Franz Woyzeck is a soldier that is often being abused by fellow soldiers as he does menial work to support his wife Marie (Eva Mattes) and their illegitimate son. Yet, working for his captain (Wolfgang Reichmann), the captain feels that Woyzeck is a good man but lacks any morals. After cutting branches with Andres (Paul Burian), Woyzeck hears voices in his head believing that the neighboring town is cursed. Meanwhile, Marie is growing tired of her husband's lack of appearance as she falls for a drum major (Josef Bierbichler) while Woyzeck's visits are only to give her money. After being caught urinating on a wall, Woyzeck's doctor (Willy Semmelrogge) wants to continue into putting him into experiments since Woyzeck for a year had been living off peas. After a strange, philosophical discussion about nature, the doctor gives Woyzeck a pay raise while adding mutton to his diet as he continues to become an experimental puppet.

During a day when he takes the family to a carnival, Marie finds herself in the arms of the drum major as she begins an affair unbeknownst to Woyzeck as he continues to become an experimental amusement for the doctor. With continue to hear voices, Woyzeck's mental state of mind becomes troubling as he also becomes the source of amusement for his captain in their continuing discussion over Woyzeck's lack of morals. With Marie whirling in this affair, she feels guilty as Woyzeck becomes suspicious as his own descent into madness becomes more troubling when he sees her dancing with the drum major. After walking through the fields, he hears more voices where he encounters the drum major where unfortunately, Woyzeck is powerless against the big, strong man. Woyzeck tries to maintain control while Marie deals with her own sins as Woyzeck realizes what he must do.

In a change of pace from the ambitious, stylized Nosferatu, Phantom der Nacht, Herzog towards theatricality of sorts where the theme of the film is merely about human nature rather than the folly of man. This time around, Herzog goes into the study of a poor, hapless soldier who does the best he can yet he is abused by those around him as he struggles to maintain his sanity. The theme of madness is also told yet Herzog uses madness to convey Woyzeck's mental descent where the abuse he's suffered and the immoral act he does only brings pity to the character. Herzog's script is filled with its conflict of human nature as well as discussions of morals and character development.

In his direction, Herzog maintains a theatricality to the film since it's based on a play as he uses long takes to convey the sense of emotions and the observance of each scene to convey a sense of morality. While some audiences might be put off by the idea of long takes and lack of ambition, the film is still a great discussion of morality and human nature from the always interesting Herzog.

Helping Herzog in his visual presentation is cinematographer Jorg Schmidt-Reitwein brings a wonderful look to the film's town including some wonderful exterior shots that aren't very stylized yet give a natural look. Editor Beate Mainke-Jellinghaus does wonderful work in cutting the film where it only featured 27 cuts since the film adds a nice pace to convey the sense of emotions to the long takes that Herzog shot. Art director Henning von Gierke does wonderful work in bringing the look of 19th Century Germany with Czechoslovakia as the location while costume designer Gisela Storch does great work in creating the costumes of the times. Sound recordist Harald Maury and Jean Fontaine also do excellent work in the sound to convey the sense of atmosphere of the times. The film's music features cuts of classical music of traditional German of those times with screeching strings arrangements to convey the sense of manic mind for Woyzeck.

The film's cast is wonderfully assembled with Irm Hermann as a woman from the dance hall and Paul Burian as Woyzeck's friend and fellow soldier Andres who starts to feel pity for Woyzeck's descent. Josef Bierbichler is good as Marie's lover who looks like the kind of man women want while his scene with Kinski shows the cruelty he is those who aren't as big as him. Willy Semmelrogge is great as the doctor who creates amusing experiments on Woyzeck to show a study of human nature as Semmelrogge stands out. So does Wolfgang Reichmann as the captain whose sense of morality and simple ideas is the right kind of antagonist for Woyzeck who has a lack of morals as Reichmann's character guides him into this emotional, mental journey. Eva Mattes gives an amazing, complex performance as Woyzeck's unfaithful wife Marie who struggles with her faithfulness in how good Woyzeck treats her yet her loneliness also drives her into infidelity as Mattes' performance is a real standout as she has great chemistry with Kinski.

Finally, there's Klaus Kinski in what has to be his most controlled and sympathetic performance to date. A role he played before in the play version, Kinski brings a lot of pity and sadness to Woyzeck as a man who is being pushed against his will in these humilating experiments and moments. There's moments when some will feel that the crazy Kinski will emerge but its his restraint that's even more shocking since he's playing a man being defeated again and again to the point that the audience is wondering when he's going to go crazy. There's a point where Kinski has some emotional epiphany but it only conveys his mental and emotional descent in what truly reveals how much power and range Kinski is as an actor.

The Region 1 DVD, from the 2000 Herzog-Kinski box set from Anchor Bay, doesn't include a lot of features rather than a trailer and talent bios for Herzog and Kinski. The DVD is presented in the widescreen presentation of 1:85:1 ratio for 16x9 TVs with Dolby Digital and Mono sound for German with English subtitles. The essay in the box set booklet by Jim Knipfel reveals that the film was shot in 18 days while edited in four days in its final cut with only 27 cuts made. While the film was considered to be one of Herzog's easiest shoots, Kinski however, pushed himself to bring the pain of the character so badly, some said he never recovered.

While not as brilliant as Aguirre, the Wrath of God or as stylized as Nosferatu, Phantom der Nacht, Woyzeck is still an amazing, harrowing film from Werner Herzog and its star Klaus Kinski. It's very clear that it's one of the essential films of both Herzog and Kinski while additional mention should go to Eva Mattes for her wonderful supporting work. While it's a bit flawed due to its theatricality, it's something that fans of theater will enjoy for its control and dedication to storytelling. In the end, Woyzeck is a must-see for fans of Werner Herzog and Klaus Kinski.

Another great Herzog review. Woyzeck is my favorite Herzog film, I love everything about it. So glad to see the film get some exposure. Well done.

It's a film that took me by surprise. Notably Kinski's performance and the fact that it didn't have a lot of cuts was made in a a very short time.

I'd like to see Michael Bay try and do that. He'd probably bitch about it.