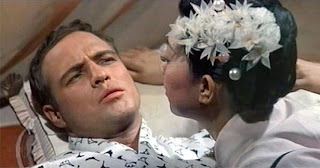 Based on the novel by James Michener, Sayonara is the story of a Korean war pilot who falls in love with a Japanese entertainer in post-war Japan. There, he deals with the prejudices about his relationship as one of his friends also fall for a Japanese woman. Directed by Joshua Logan and screenplay by Paul Osborn, the film is a romantic drama told during a period when tension still loomed towards Japan in the aftermath of World War II. Starring Marlon Brando, Patricia Owens, James Garner, Martha Scott, Miiko Taka, Miyoshi Umeki, Ricardo Montalban, and Red Buttons. Sayonara is a lush yet mesmerizing drama from Joshua Logan.

It’s 1951 during the Korean War as fighter pilot Major Lloyd “Ace” Gruver (Marlon Brando) has been transferred to be stationed at the Itami Air Force Base near Kobe, Japan. Joining him is Airman Joe Kelly (Red Buttons) who reveals to Gruver that he’s marrying a Japanese woman named Katsumi (Miyoshi Umeki) whom he’s fallen in love with. Though there’s laws about officers marrying Japanese women, Gruver decides to support Kelly for the marriage. Gruver meanwhile, is set to be engaged to Eileen Webster (Patricia Owens) whose father is Gruver’s superior Lt. General Mark Webster (Kent Smith). The two attend a Kabuki play that features the revered actor Nakamura (Ricardo Montalban) whom Eileen knows as she and Gruver have concerns over their engagement.

Still intrigued by the world of Japan, Gruver wanders into the bridge near a women’s only theater where he meets Army captain Mike Bailey (James Garner) as Gruver catches the eye of the troupe’s lead actress Hana-ogi (Miiko Taka). After watching her perform, Gruver falls for her as he tries to win her over with Kelly and Katsumi’s help as he is introduced to their home life. When Hana-ogi accepts Kelly’s invitation for dinner, she and Gruver officially meet where she reveals her disdain towards Americans over World War II but is intrigued by Gruver. The two form a relationship that blossoms only to become secretive when Eileen warns Gruver about a law that is being made by the prejudiced Colonel Crawford (Douglass Watson. Though Gruver maintains the secrecy of his relationship with Hana-ogi, Crawford’s laws starts to intensify when Bailey finds a notice for men to stay away from Japanese women.

The law would have an affect on Kelly who is asked to return to America and leave Katsumi. While Gruver tries to appeal to Lt. General Webster, he is unable to as he would later reveal his own intentions to marry Hana-ogi to the horror of Webster’s family. The shock only intensifies where Gruver encounters tragedy as well as the prejudice he faces from both Americans and Japanese.

The film is a romantic tale of an American air force officer who falls for a Japanese actress during the Korean War as it would get the attention of military officials. Meanwhile, the officer tries to support a fellow officer who marries a Japanese woman and wants to live the life of a Japanese man who is American. The exploration of prejudice is wonderfully told without being heavy-handed as screenwriter Paul Osborn also reveals about the world of duty. Notably for Hana-ogi who is a woman that loves her work but there’s much deeper reasons into why she has to do what she does. For Ace Gruver, it’s also complicated as he’s the son of a four-star general that is destined for great things but is unsure about what to do as he’s set to marry a woman that would help his rising status though the two prefer to be friends. The screenplay succeeds in building up Gruver’s relationship with Hana-ogi and falling for Japanese culture as well as the subplots about Kelly’s life and a smaller one involving Eileen’s attractions towards Nakamura.

Joshua Logan’s direction is truly exquisite to watch through the gorgeous compositions he creates for the film. Since there aren’t many close-ups in the film, a lot of the shots are either very far or simple medium shots to capture the actors in the frame as well as their surroundings. Featuring some amazing scenes involving theatrical plays and performances, it adds to the lavish and unique world that Gruver is entranced by while there’s a much smaller scene where Gruver, Kelly, Katsumi, and Hana-ogi watch a play that would foreshadow the tragedy that’s to come in the third act. Logan’s direction is also understated in playing up the melodrama to focus on the performances while keeping things simple for some of the less dramatic moments including the small moments of humor. Overall, Logan creates a very majestic film that is touching and powerful in its themes.

Cinematographer Ellsworth Fredericks does brilliant work with the film‘s vibrant and colorful Technicolor cinematography that captures the beauty of postwar Kobe from the rural canal streets to the various landmarks along some amazing lights for Hana-ogi‘s first performance that Gruver sees. Editors Arthur P. Schmidt and Philip W. Anderson do excellent work with the editing by utilizing wonderful rhythmic cuts to capture the intensity of the drama along with transitional dissolves to help move the film in a relaxed pace. Art director Ted Haworth and set decorator Robert Priestley do amazing work with the set pieces created such as Kelly’s home that Gruver starts to inhabit to the lavish stage productions that is filled with amazing lights and backdrops.

Costume designer Norma Koch does wonderful work with the American military uniforms as well as dresses that Eileen wears though the highlights of the costume are the Japanese robes that the men and women wear including Gruver later in the film. Sound editor Carl Mahakian does terrific work with the sound to capture the atmosphere of the rehearsal palace that Hana-ogi lives in to the broad atmosphere of the crowds in the stage scenes. The film’s score by Franz Waxman is superb for its mixture of bombastic and serene orchestral score to low-key yet evocative Japanese folk music to play up the atmosphere. The film’s title song by Irving Berlin is very good that is played in the background and at the film’s ending to emphasize the love between Gruver and Hana-ogi.

The casting by Sally Baiano is phenomenal for the ensemble that is created as it includes notable small roles from Martha Scott as Eileen’s mother, Reiko Kuba as Bailey’s Japanese girlfriend Fumiko, Douglass Watson as the prejudiced Colonel Crawford, and Kent Smith as Eileen’s father/Gruver’s superior Lt. General Watson. Ricardo Montalban is very good as the kind and sympathetic actor Nakamura who helps Gruver while becoming close with Eileen though the only drawback in Montalban’s performance is some of the make-up to make him look Japanese. Miyoshi Umeki is wonderful as Kelly’s kind wife Matsui whom Gruver grows to adore while comforting her over the orders Kelly is being asked to do. James Garner is excellent as army Captain Bailey who aids Gruver into the tense situations over Crawford’s law as he also finds attraction towards a Japanese dancer in Fumiko.

Patricia Owens is radiant as Gruver’s intended fiancee` Eileen who shows Gruver the world of Japanese culture while finding herself being drawn to the actor Nakamura. Miiko Taka is lovely as the enchanting actress Hana-ogi who falls for Gruver as there is a quiet yet engaging performance in this woman who has dealt with loss as she also finds comfort in this kind man. Red Buttons is fantastic as airman Joe Kelly who tries to deal with the prejudice over his marriage to Matsui while wanting to fight for the life he’s become accustomed to. Finally, there’s Marlon Brando in a remarkable performance as Major Lloyd “Ace” Gruver. Brando brings a wonderful charm to his character who tries to win over Hana-goi with a restrained sense of humor while going for a more low-key approach to the drama as he also sports a Southern accent. It’s one of Brando’s best performances as he also has some amazing scenes with Buttons that adds more weight to the film.

Sayonara is an extraordinary drama from Joshua Logan that features outstanding work from Marlon Brando and Red Buttons. Along with great supporting work from Miiko Taka, Miyoshi Umeki, Patricia Owens, and James Garner. It’s a film that is rich in its lush imagery while telling an engaging story about prejudice in post-war Japan that is driven by fear. In the end, Sayanora is a magnificent film from Joshua Logan.