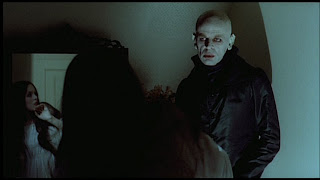 Based on Bram Stoker's story of Count Dracula, Nosferatu, Phantom der Nacht (Nosferatu, the Vampyre) is the story how a man came to Transylvania to meet with the mysterious Count Dracula only to capture him and claim the man's wife. Written for the screen and directed by Werner Herzog, the film is a remake of sorts of F.W. Murnau's 1922 version that was famously played by Max Schrek. For this version, the film stars Klaus Kinski in the title role marking their second collaboration between Herzog and Kinski. Also starring Isabelle Adjani, Bruno Ganz, and Walter Ladengast. Nosferatu is a fascinating, haunting remake from Werner Herzog and its star Klaus Kinski.

In the small German town of Wismar in 1850, real estate agent Jonathan Harker (Bruno Ganz) is asked to close a deal for a home that is bought by a mysterious man named Dracula. Going to the Carpathian Mountains under the order of his eccentric boss Renfield (Roland Topor), Harker says goodbye to his wife Lucy (Isabelle Adjani) who thinks the trip is a bad idea. Still, Harker goes on the four-week trek from Wismar to Romania as a stop at a small Romanian town has him encountering gypsies who believe that the castle is cursed. Still, Harker continues his journey as he rides a mysterious carriage to the castle where he meets the reclusive Dracula. After a tense meeting over the business deal, Harker is irked by Dracula's dark presence as her never sees him in the daylight as her later becomes ill. After Dracula sees Harker's locket that carries a picture of Lucy, Harker's illness intensify where he's trapped in Dracula's castle while learning of his true identity.

Dracula flees via a small group of caskets shipped to Germany as Harker makes an escape where Dracula eventually arrives to Wismar. There, Lucy's paranoia over Jonathan gets the attention of a doctor named Van Helsing (Walter Landengast) who think she's ill from a fever. The ship that carries caskets as it arrives with a dead crew and rats as Van Helsing believes there's a plague happening. Dracula finally emerges as he meets with Renfield to have him give out orders while the ailing Jonathan finally arrives at Wismar. Dracula meets Lucy as he wants her love as she refuses as he leaves to try and win her again. With the plague intensifying and Jonathan's illness increasing, Lucy reads Jonathan's diary to discover what is happening as she waits for Dracula to arrive.

While Herzog's adaptation of Dracula isn't the most faithful version of the story he switches the main heroine of Mina to a supporting character with Lucy being the Mina role. Still, the film is clearly more of a remake of the original Murnau film as Herzog again goes for the conflict of man vs. environment. This time around, the dark environment are in Transylvania as Jonathan enters the dark world where he nearly dies. The second is in Wismar where at night, Dracula seems to take an advantage only right till the end. Herzog's script and wandering direction really brings a strong yet entrancing approach to the story of Dracula where he's given a different portrayal than the ones several years ago. Plus, given to Herzog's views of nature. He definitely goes for nature vs. man but this time around, it's Dracula who controls nature to send a plague on humanity. While the film is merely a stylized account of the story of Dracula, it's done with a lot of intelligence mixed with entertainment that it's still a strong film from Herzog.

Helping Herzog in his presentation is cinematographer Jorg Schmidt-Reitwein whose work in the shades, shadows, and lighting set-ups are exquisitely amazing to convey the dark atmosphere of the night in Transylvania and Wismar. Editor Beate Mainka-Jellinghaus does excellent work in bringing a stylized, rhythmic approach to the editing to convey the suspense and momentum of the film. Art director Henning von Gierke does an amazing job in creating the decaying, ominous look of Transylvania as well as that eerie clock of Dracula's. Costume designer Gisela Storch does great work in creating the 19th-Century costumes while making a great, black cloak for Kinski that is wonderful. Makeup artists Dominique Colladant and Reiko Kruk do great work in creating the look of Kinski's Dracula with its ears and teeth. Sound recordist Harold Maury also does excellent with the film's atmosphere. The German group Popol Vuh and its leader Florian Fricke brings a haunting score filled with an ominous choir to convey the sense of horror as well as a dreamy, folky track for the film's early, romantic sequences. The rest of the soundtrack includes an operatic track from Charles Gounod and the sweeping Das Rheingold from Richard Wagner.

The film's cast includes some notable small performances from Jan Groth as a harbormaster, Cartsen Bodinus as Schrader, and Martje Grohmann as Mina. Roland Topor is hilarious and creepy as Renfield with his irritating cackle and wide-eyed face. Walter Ladengast is excellent as Van Helsing with his restrained, weary presence as a man who tries to understand what's going on only to realize that he might be the one to stop everything. Bruno Ganz is great as Jonathan Harker with his cautious performance as a man who is unaware of the atmosphere he's in and tries desperately to save his wife only to find himself ill. Though she doesn't have much to do, Isabelle Adjani is amazing as the paranoid, scared Lucy Harker as it's her face that does a lot of the acting and Adjani's minimalist performance is great as she has some great scenes with Kinski. Finally, Klaus Kinski is brilliant in the film's title role as Dracula. Kinski's performance is very restrained yet he brings a lot of depth to the character where he lets his face bring a lot of horror while adding a range of restrained emotions to the role. Again, Kinski owns the film like he did in his previous collaboration with Herzog in Aguirre, der Zorn Gottes.

The Region 1 DVD from the 2000 Anchor Bay Herzog-Kinski box set presents the film in the widescreen format of 1:85:1 ratio for 16x9 TV screens plus 5.1. and 2.0 Dolby Digital Surround Sound in German with English subtitles. The DVD version of the box set is the film's German version which is considered superior to the English version of the film (which is also available, seperately, on DVD). The special features include two U.S. trailers (one with voiceover), a Spanish trailer, the talent bios of Herzog and Kinski, and a 13-minute making-of featurette. The making-of segment is presented by the film's original distributor, 20th Century Fox as Herzog talks in English about Nosferatu where he said the 1922 Murnau version was the greatest film in German history. The making-of reveals the actors performing in English (he also shot them in German, since Herzog, Ganz, and Kinski are German) while directing several sequences in the Delft area of Holland. It's one of the more insightful featurettes into how Herzog works, including his moments with Kinski, while Kinski is shown putting on the makeup of Dracula.

The second special feature is a commentary track from Herzog and Norman Hill. Herzog discusses about wanting to remake Murnau's version but adding new things with some shots in tribute to the original film. He discussed Kinski's notorious behavior which was difficult to handle as well as many of the actors' discomvort in speaking in English for the film's U.S. version given their thick native accents. Herzog discusses with Hill about maintaining an atmosphere for the film where he admitted to having a few problems with the American distributors at 20th Century Fox as well as casting issues since Herzog was using then-unknown European actors. Herzog admits to making compromises for American audiences to the film though he didn't think it was a big deal while giving his own opinion on Francis Ford Coppola's version of Dracula. One enjoyable part of the commentary is Herzog talking about how the rats were shipped from Germany, through Austria and to Holland where he revealed a very funny story about the rats going through custom

While fans of the Dracula story might be put off by some of the changes in the story, Nosferatu, Phantom der Nacht is still a faithful, atmospheric film from Werner Herzog and its star Klaus Kinski. With a great supporting cast and wandering images, it's still a film that brings elements of horror while staying faithful to the original Murnau film. Fans of Herzog and Kinski will indeed consider this film as one of their great collaborations in the five films they made. In the end, Nosferatu, Phantom der Nacht is an excellent adaptation of the story of Dracula.

Not certain whether or not it is intentionally amusing, with Werner Herzog you never can tell, but I find Dracula's death hysterical

I do like this film a lot though it's been five years since I've last seen it. I do love Kinski's performance in that film.

Excellent review, and thanks for drawing attention to the film's remarkable, reoccurring use of Wagner's Das Rheingold, that music fits the tone of the film perfectly. I think I may be the only person alive who prefers Herzog's film to Murnau's, but I can't help myself. Kinski and Herzog together is a collaboration that I cannot speak highly enough of.

@Alex-Thank you. I wonder what actor-director combo would be able to match up against Herzog and Kinski these days?

Hmmm, if McQueen and Fassbender keep their thing going, I will live happily. Marty and Leo have a pretty decent streak going too. But yeah, nothing touches Herzog/Kinski in today's world.

@Alex-Exactly. Plus, Kinski is scary.