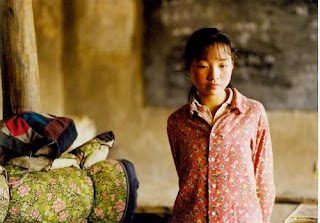 Based on Shi Xiangsheng’s A Sun in the Sky, Not One Less is the story of a 13-year old child who fills in for her schoolteacher to teach other kids for one month. There, she has to make sure she doesn’t lose a child during the duration where she tries to find a boy who leaves to search for work. Directed by Zhang Yimou with a script written by Shi Xiangsheng, the film explores the world of the Chinese educational system as well as its social classes. Starring Wei Minzhi and Zhang Huike. Not One Less is a touching melodrama from Zhang Yimou.

Hired as a last-minute substitute teacher for Gao (Gao Enman), Wei (Wei Minzhi) is a 13-year old who can barely read as she is asked by the village’s mayor (Tian Zhenda) to take over for a month. Gao is leaving to watch over his ailing mother as he tells Wei to not lose one student during the month or else she won’t get paid properly. Wei tries to deal with the 28 students in her class including troublemaker Zhang Huike (Zhang Huike) as she has a hard time trying to save chalk and teaching the kids. When one of them leaves because of her running talents, Wei isn’t sure tough the mayor insists it’s OK. Then Huike is gone as Wei tries to find him where she learns that he went to city looking for work. With the help of the remaining 26 students, Wei tries to raise funds to get a bus ride only to have further complications over money.

With little money left, she sneaks a ride into a bus and later hitchhikes to the city where she tries to find the people Huike was supposed to live with. With the help of a teenager (Sun Zhimei), Wei tries to get announcement made but with no results as Huike is lost in the city. Wei continues to try and find Huike through ads she made and trying to get in touch with a TV station manager (Wu Wanlu) only to face the harsh reality of the city and its people. After waiting for more than a day outside the TV station, its manager sees what happen as he hears her story that brings a much bigger issue about what is happening in her poor village.

The film is about a young 13-year old who is asked to teach a group of children in small village, with little resources and money, and hope not to lose one. Instead, one of those kids leaves so he can help pay off his ailing mother’s debts by going to Beijing forcing this young woman to try and find him in the most troubling circumstances. Though she is this very naïve person who is very unlikely to find this kid who had been a huge source of trouble for her. She is very determined about getting him back after losing one child under different circumstances. Yet, she enters into this world that is very different from the rural environment that she lives in.

The screenplay by Shi Xiangsheng is a story that doesn’t rely a lot on plot but rather the actions of its characters. Many of them are flawed due to the environment they live in as the mayor is concerned with the fact that he’s going through financial difficulties while Huike is this kid that is kind of a schemer until he finds himself begging for food in the city. A lot of the film’s narrative is driven by Wei’s determination to not let this old teacher down and help teach these kids despite her educational limits. Upon entering Beijing, she would encounter people who reluctantly help her but they need money and other things where it becomes this very tense moment where she has to grow up and face harsh facts. Particularly as there’s the idea that if she doesn’t get this kid back, she could lose everyone else.

The script is also an exploration about the educational system in these remote villages in China where resources are scarce and money is tight. They had to make sure every piece of chalk used for lessons isn’t wasted or ruined. There’s an element of social commentary that Xiangsheng wants to emphasize but doesn’t do it in a heavy-handed manner. Instead, Xiangsheng only uses that commentary to underscore the drama that is more about this young girl trying to get a boy home.

Zhang Yimou’s direction is truly extraordinary to watch in its understated yet engaging approach to the film. Shot largely in a cinema verite style with some hand-held camera movements and lots of very striking compositions to emphasize the beautiful yet remote landscape of the Hebei province. Wanting to maintain a realistic approach to the film, Yimou chooses to work with non-actors to flesh out naturalistic performances. Due to the lack of conventional script, the film does start out slow as it takes its time to establish the situation this young girl is in to teach these kids as she becomes concerned about wanting this extra money by not losing one kid from the class.

For the scenes in Beijing, Yimou wisely decides to avoid shooting on actual landmarks to play up the realism of the city where it’s quite grimy at times. Particularly as the camera often follows Wei in her journey while creating this sense of dread that might be coming. The idea that she could lose everything in the end of the film does loom but Yimou does find a way to bring a sense of hope in the story. Though it’s an ending that might seem tacked on due to government pressure. The outcome does manage to provide something that is very touching while it would express the problem of the country’s educational system at that time. Overall, Yimou creates a truly heartwarming yet harrowing drama that delves in a young girl trying to help find a boy to find a life outside of poverty.

Cinematographer Hou Yong does excellent work with the film‘s naturalistic cinematography from the vast yet colorful look of the Hebei scenes with its mountains to the more vibrant look of some of the Beijing locations at night. Editor Zhai Ru does brilliant work with the editing in creating lots of stylized cuts to play up Wei‘s struggles through jump-cuts and dissolves as well as methodical rhythms to help flesh out the situations presented. Production designer Cao Juiping does terrific work with the look of the school that Wei works at to emphasize its drab environment and resources it needed.

Costume designer Tong Huamiao does nice work with the costumes that are mostly casual and realistic to play up the world Wei and Huike live in. The sound work of Wu Lala is superb for the sparse intimacy of the Hebei locations to the raucous atmosphere of Beijing. The film’s music by San Bao is hypnotically evocative for its simple and understated flute theme to play up the drama along with a smooth string piece that helps further the drama without going overboard.

The film’s cast which consists of non-actors are all wonderful in their roles as they all play themselves in the real professions they have. The big standouts include Zhang Huike as the troublemaking student who flees school to find work in the city and Wei Minzhi as the 13-year old substitute teacher who tries to find him.

Not One Less is a marvelous melodrama from Zhang Yimou. The film is truly a very touching and engaging story about a poor girl trying to make a difference and later to try and retrieve a lost boy so he can go back to school. While the film may not have some of the more visually-stylish flair of Yimou’s later films, it is definitely one of his most essential. In the end, Not One Less is a remarkable film from Zhang Yimou.

wow,it looks like you are a Zhang Yimou fan.

I like the realism in it,this film made a huge impact in China,few people have thought the education environment is so poor in countryside.It is one of the films made with conscience,I give Yimou credit for that.

Oh I watched this a few months ago! Quite the story of perseverance indeed and glad you checked this out Steven :)

@David-I consider myself a casual fan as I own a couple of his films on DVD and have only seen a handful of them. This was on TV a couple of weeks ago and I decided to DVR the film since it was on a channel that was only there for a couple of weeks. I wasn't expecting the film to aim for that kind of realism which is one the reasons I enjoyed it.

@Castor-I'm glad I decided to watch it as my mother, who is a fan of Asian films, is interested in seeing it so it's still on the DVR hard drive.

Good review of a really good film. I liked it quite a bit myself. Here was my review of it last fall, if you are interested:
http://tipsfromchip.blogspot.com/2011/09/movie-not-one-less-1999.html

@Chip-Thank you. This was quite of a surprise myself as it's one of those films that isn't played on TV very much. Needs a new DVD transfer though.

I will definitely check out your review.