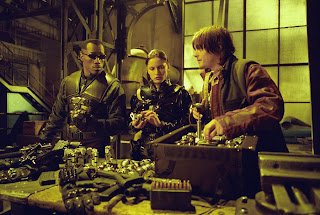 Based on the Marvel comic book by Marv Wolfman and Gene Colan, Blade II is the story of a vampire hunter, with vampire powers, who is hired to fight off a new breed of vampires that is threatening a company of vampires trying to keep the peace with humans. Directed by Guillermo del Toro and screenplay by David S. Goyer, the film is the second part of a trilogy that would stand out from the films made in the original trilogy as Wesley Snipes reprises his role as the titular character. Also starring Ron Perlman, Leonor Valera, Norman Reedus, Luke Goss, Karel Roden, Thomas Krestchmann, Tony Curran, and Kris Kristofferson returning as Whistler. Blade II is an exciting action-thriller from Guillermo del Toro.

Two years after Whistler’s disappearance, Blade has finally found him in Eastern Europe where would battle various vampires to retrieve him. Though weakened, Whistler is able to recover in Blade’s secret workshop that includes Blade’s gadgets inventor Scud (Norman Reedus). On one particular night, the workshop is broken in as Blade would stop the two revealing to be Nyssa (Leonor Valera) and her associate Asad (Danny John-Jules). Nyssa is the daughter of vampire overlord Eli Damaskinos (Thomas Krestchmann) who wants to form a truce with Blade to stop a virus that is carried by a mysterious man (Luke Goss) who is a new breed of vampires that feeds on both humans and vampires. Blade reluctantly joins Damaskinos as Whistler and Scud would team up with Nyssa and her team that includes the cocky Reinhardt (Ron Perlman).

Going into a secret vampire club to find these new breeds called Reapers, they learn that they’re more powerful than vampires except when it comes to sunlight. Still, Blade wonders why the head of the Reapers didn’t kill Nyssa while Whistler captures a Reaper for Nyssa to examine. Realizing what it will take to kill the Reapers, Blade and the team go into another battle where more chilling discoveries are made into why Blade has been hired. Whistler also makes a discovery about the head Reaper and why he’s been coming forcing Blade and Whistler to fight against the enemy.

The film is a continuation of the Blade story where the half-human, half-vampire who hunts vampires is forced to make a truce with his enemy to stop a new breed of super vampires who feed on both humans and vampires. There, he discovers that not all vampires have ulterior motives while the head of this new breed of vampires has reasons that are far more personal than what is expected. While the story is formulaic in terms of what is expected in a comic-book action-thriller, screenwriter David S. Goyer does find ways to keep the suspense going as well as creating characters who are quite complex. Notably Blade as he still struggles with who he is while regaining Whistler, who was in near-death, only adds to the struggle. Still, the Whistler character is the guy that grounds Blade while the vampire Nyssa is aware of Blade’s secretive persona though she is able to get through him.

Goyer’s script also succeeds in finding humor in the story for some of the situations that occur. Notably in the way Blade would interact with foes and allies while it’s mostly very subtle. Still, it’s an action film as Goyer creates moments where it’s about the battles and the stakes in these fights that Blade would be a part of. The overall work Goyer does is superb as he creates a solid script that is a cut above the typical action, comic-book based films.

Guillermo del Toro’s direction is definitely engaging for the stylish approach he does for the film. Notably as he chooses to create a film where it has a different look and feel than its 1998 predecessor. While the film does have conventional ideas of action and fight scenes that is typical of martial-arts action-adventure with some suspense. One of the key elements that allows del Toro to do more is setting up the battle while taking his time to play with the film’s suspense and humorous moments. Notably in the former where there’s a lot of suspicion as del Toro slowly builds up the moment where Blade and Whistler think something isn’t right.

Another key element of del Toro’s direction is the way he creates an atmosphere to the setting that the characters encounter. Whether it’s the brooding moments in the sewers to fight off the army of Reapers or the world that Damaskinos lives in that is sleek yet ominous. It’s part of del Toro’s gift as a filmmaker where he pays attention to the set pieces and the objects that could play a key role in the story. The vast compositions and close-ups del Toro create is very engaging and vibrant for the mood that is set as well as the drama that unfolds. Overall, del Toro creates a very engrossing yet very entertaining film that does a whole lot more than what its genre expects.

Cinematographer Gabriel Beristain does excellent work with the stylish cinematography from the sepia-drenched nighttime interior and exterior settings for Damaskinos‘ halls as well as a dark-blue look for the chilling sewer scene. Editor Peter Amundson does superb work with the editing to maintain a leisured pace for the film while using swift cuts for some of the film‘s fights without being too fast. Production designer Carol Spier, along with art director Elinor Rose Galbraith and set decorators Jeffrey Kushon and Peter P. Nicolakakos, does brilliant work with the set pieces such as Blade‘s home base as well as the sleek look of Damaskinos‘ lab.

Costume designer Wendy Partridge does fabulous work with the costumes that include the sunlight-repellant leather Blade and the vampire team wear during the sewer sequence. Visual effects supervisor Nicholas Brooks does nice work with some of the film‘s visual effects including some of the animation for the Reapers mouth and their interior body parts though some of the movements in the fight scenes by the characters look wobbly at times. Sound designer Scott Martin Gershin and co-sound editor Mathew Waters do wonderful work with the sound from the sound of gunshots and sword clangs to the atmosphere of the club and sewer scenes.

The film’s score by Marco Beltrami is terrific for the mixture of sweeping orchestral bombast that is mixed with chugging rock music to play up the sense of excitement of the film. With additional music by Danny Saber and Buck Sanders, the score features bits of electronic music to play up some of the film‘s action scenes. Music supervisor Happy Walters provides a soundtrack that is a mix of hip-hop, rock, and electronic music as it includes collaborative tracks from Massive Attack/Mos Def, Redman/Gorillaz, Ice Cube/Paul Oakenfold, the Crystal Method, Bubba Sparxxx, the Roots/BT, Busta Rhymes & Silkk tha Shocker/Dub Pistols, and Cypress Hill/Roni Size. It’s an interesting yet engaging soundtrack as the film’s music is a real highlight.

The casting by Nancy Foy is outstanding for the ensemble that is created as it includes appearances from Santiago Segura as a vampire Blade meets early in the film and Karel Roden as Damaskinos’ lawyer who tries to conduct business for his boss. For the roles of Blade and Nyssa’s team, there’s fight choreographer Donnie Yen as the mute swordsman Snowman, Marit Velle Kile as the red-haired Verlaine, Tony Curran as the Scottish Priest, Daz Crawford as the hammer-wielding Lighthammer, Danny John-Jules as Nyssa’s friend Asad, and Matt Schulze as the brash Chupa. Luke Goss is very good as the Reaper leader Jared Nomak who is hell-bent on revenge while proving to be a tough opponent for Blade. Norman Reedus is terrific as Blade’s gadget-creating friend Scud who proves to be a resourceful aid for Blade.

Thomas Krestchmann is superb as vampire council head Eli Damaskinos who hires Blade to help him fight off the Reapers only to have far bigger motives that would make Blade suspicious. Leonor Valera is pretty solid as Damaskinos’ daughter Nyssa who aids Blade in fighting the Reapers while realizing what kind of a person he is when it comes to avoiding trouble. Ron Perlman is amazing as the vampire Reinhardt who despises Blade as Perlman gets to have some of the film’s funniest lines while never taking off his sunglasses. Kris Kristofferson is great as Blade’s mentor Whistler who gives Blade advice while being part of the team as he is aware that something isn’t right as Kristofferson also provides some wonderful one-liners.

Finally, there’s Wesley Snipes in a kick-ass performance as the titular character as he provides a calm performance of a man struggling with himself. Even as he teams up with vampires where Snipes also brings charm to his character while showing that he can seriously kick some ass.

Blade II is a marvelous and thrilling film from Guillermo del Toro that features great work from Wesley Snipes, Kris Kristofferson, and del Toro regular Ron Perlman. Of the three Blade films, this one is certainly the best in terms of its production value as well as David S. Goyer’s suspense-driven screenplay. While it may not live up to some of the films that Guillermo del Toro would do later on. It is still a great example of the kind of work he does where he will do more than just entertain by telling a story with characters that audiences can enjoy watching. In the end, Blade II is stellar yet fun action film from Guillermo del Toro.

I get a lot of flack for liking this film as much as I do but I think it is by far the best in the Blade series. I would even goes as far as putting it in my top ten comic inspired films of all time (or at least very in the 11 spot).

As far as Del Toro films go, it probably ranks third for me. I find I re-watch it more than I do Hellboy (which I also love) but it is not as good as Pan's or The Devil's Backbone

It is the best film of the series. In fact, it's better than a lot of comic-book based films. While I wouldn't rank it as high with all of del Toro's other films. It does have all of the visual splendor and humor of his work. Plus, it's fun to watch. Roger Ebert was so right about this film.